Like the adage about the old man planting trees whose shade he won’t live to sit under, I spend much of my spare time collecting, assembling, curating, and otherwise maintaining a massive collection of aphids most of which I will not live to study.  My plan all along has been to build the best collection I could, given the constraints of funding, person-power, time, and space, and then donate it to major museums around the world to benefit science for decades or centuries to come.  In these times of extreme domination of global politics by the wealthy and multi-national corporations, the running rampant of capitalism, the extreme poverty of parts of the world together with extreme income inequality in other parts of the world, the continued plunder of the Earth’s natural systems, the great influence of the military industrial complex, the increase in the police state in so-called free countries, etc. and so forth, one can sometimes feel that any task with a long-term pay-off is wasted effort.  In order for a thing like an aphid collection to be useful in decades to come, human society has to survive intact with its ability to conduct and appreciate science.  Some days, watching my Twitter feed, I wonder whether human society will collapse in the coming century and lose its interest in biodiversity or simply lose its capability to be concerned or do anything about it.  In times like this I get creeping feelings that all my work on my collection is for naught because we may be at the end of an era of human society wherein study of the natural world is supported or believed to be worthy.  By the time I die, or by the time 2100 rolls around, will biodiversity collections be a ghost of the past, destroyed or neglected like the Buddhas of Bamiyan, the pyramids of Egypt, or history books in the U.S.A.?

These are the thoughts that wriggle through my consciousness as I tend my collection of aphids.  More than 12,000 slides, that has been a lot of sample processing, label writing, identification, and collection curation.  This winter, I am tackling a long-overdue task of re-labeling a few hundred slides from my graduate school days when I believed I would carve off a bunch of Macrosiphum species to form a new genus, “Robinsonaphis.”  Having been correctly dissuaded from this move by my wiser colleagues and mentors, this aphid genus was never published.  But, my collection has many slides in it optimistically labeled with this genus name back in 1996. 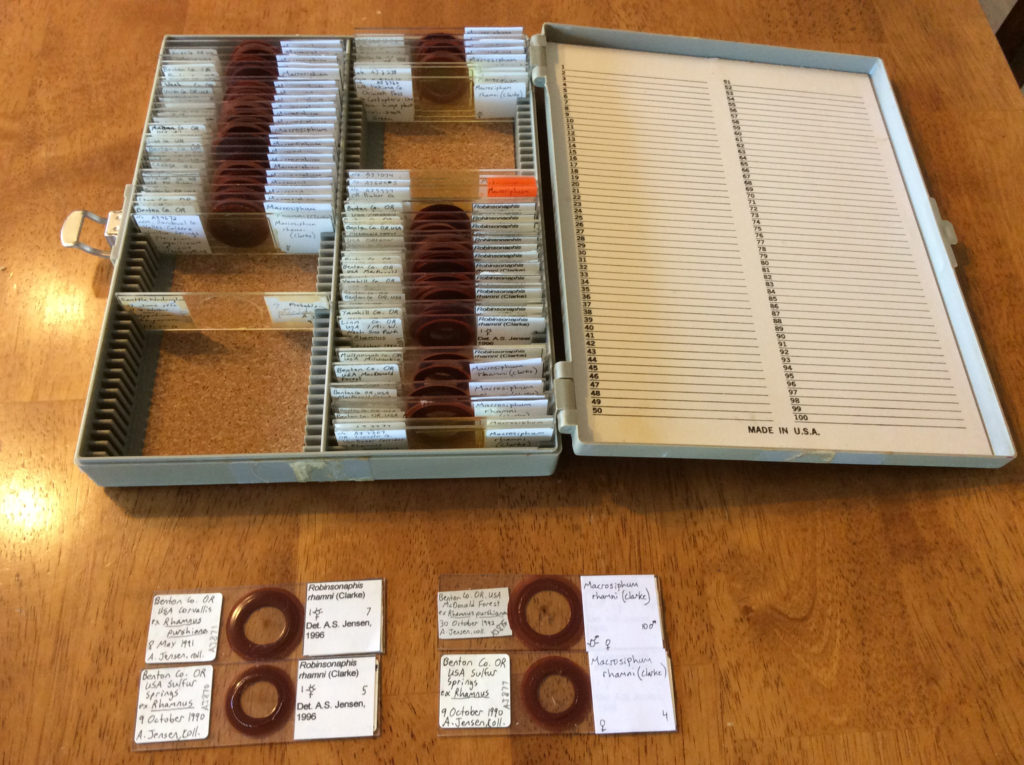 Relabeling slides from the early 1990s.

And as in every winter, I am databasing all the slides I make, electronically filing them before filing them in the real world.  The main reason for this databasing is to make my collection accessible to colleagues while I’m alive, and to make it easier to donate to the California Academy of Sciences after I die.  For my everyday work the database is rarely used. 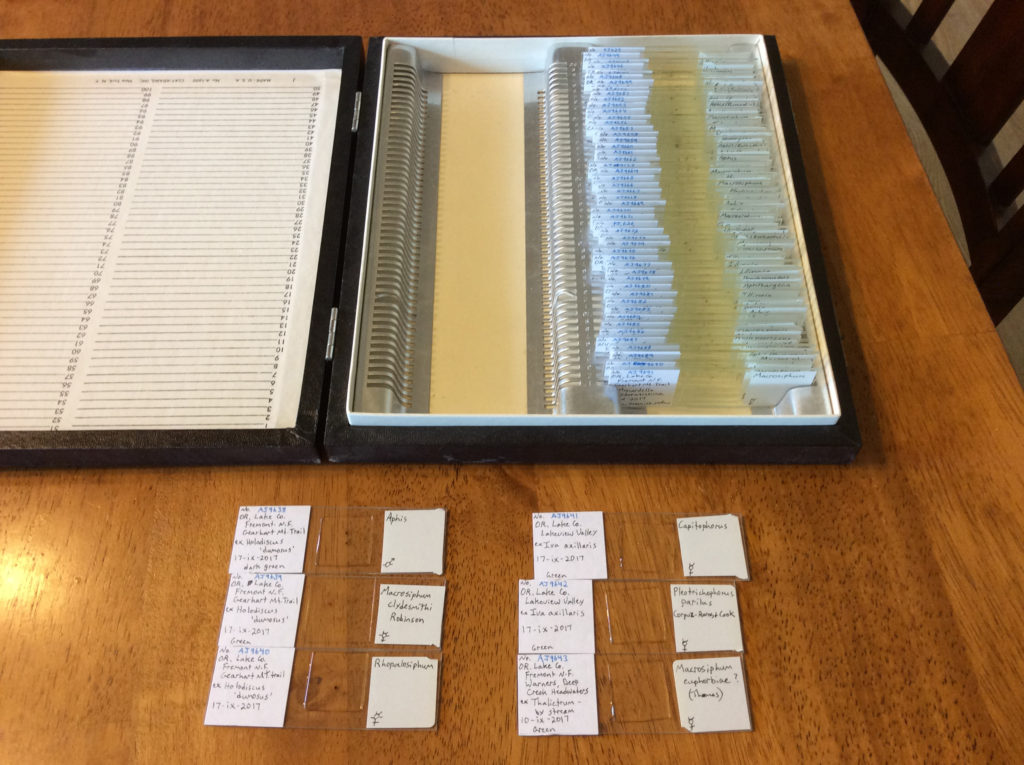 In the middle of typing in the slide label data for another box of new slides, December 2017.

My aphid collection could be exceptionally useful to people carrying on the torch of aphid diversity, biogeography, ecology, and systematics for centuries to come.  But, equally likely, it could be meaningless after the collapse of civilization as we know it, possibly within this century.  So the question: continue to do my best with it, or give up in despondency?  I choose to forge ahead.  My aphid collection is the tree under whose shade I’ll never sit.  It is my practice.

Our favorite Ponderosa pines in the Warner Mountains. The cut-to-lengths and grapple pilers are there as we speak. Will these trees survive this winter’s plunder?