Since the first ZC (a potato disease also called ‘zebra chip’, transmitted by potato psyllid) outbreak in the Northwest in 2011, much yellow sticky card trapping has been undertaken in potato fields across the region. From these traps it is clear that many species of psyllids inhabit our states. Partly in response to questions about what those non-potato psyllid species were, and partly in response to my own curiosity, I started collecting psyllids everywhere I went to collect aphids.  When beginning my work on psyllids in the field, I had a few main objectives:

I have found many psyllids, and learned a lot in 3+ years of field work. 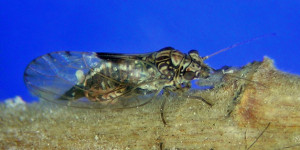 A somewhat common psyllid that feeds on Ribes aureum in Idaho.

I have not focused on photos quite as much as in aphids, and I have not worked on learning the taxonomic literature and identification of psyllids.  In fact, I have been slide mounting everything (yes, I know, psyllid taxonomists don’t like that fact), sorting immediately to family, and then sorting later into what seem like reasonable species and generic groupings, the latter with almost no information about the established psyllid classification.  I set out to do this as a fun exercise — to see if any classification I arrived at for my specimens mirrored (or not) the classification that already exists and has been built over the last century plus.  All of this is work in progress that goes slowly because I have little time to devote to it.  As I have psyllid stories to tell, I will post some here.