I am prompted to do a quick mini-review of the Ericaphis of North America by some actual applied work in blueberries in Washington state. 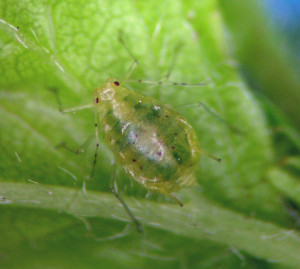 Ericaphis gentneri fundatrix from northern Idaho. This is one of the only species in this group that is fairly easy to recognize.

As I have mentioned when describing my collection, Ericaphis is one of the genera in which I largely abandoned  species-level determinations many years ago.  The reasons for this include:

Because of these factors, I have spent the past 20+ years collecting Ericaphis and filing them together but without species names attached.  In the accounts below, I  will cover some of the details of the named species of Ericaphis, note the ways in which other published accounts are incomplete in view of my collection, etc.

This species name is at the crux of the practical question for blueberry producers afflicted by pestiferous Ericaphis in the west.  The species was first described by W.R. Richards in 1959 based on less than 20 specimens all collected from cultivated strawberries (Rosaceae) on Lulu Island in British Columbia, Canada.  This is not uncommon, basing a new species on so few specimens, but is itself reason to doubt whether any specimens collected subsequently from other plants or at other times of year from the same plant, are the same aphid species.  Aphids are just too variable to confidently tie a huge range of subsequent samples to such a limited description.  Many specimens collected since Richards’ description were found on  various species of Rosa, including many in my collection (samples from Rosa so far: British Columbia, Washington, Oregon, Idaho, and Utah).

Since 1959, aphids in this group have been studied and collected extensively in Washington and British Columbia in association with the blueberry (Ericaceae: Vaccinium) industry in the region.  The name E. fimbriata has commonly been applied to these specimens, and I agree that it is a reasonable decision based on morphology.  On the other hand, the species E. scammelli was originally described from cranberry (Vaccinium) in New Jersey, including alate males and oviparae, indicating a monoecious life cycle.  Mason described this one in 1940 based on an indeterminate number of specimens and, because of the type of description and slide preparation common at the time, provided almost no useful information in the description.  So, left with the work of others to separate E. scammelli and E. fimbriata, we might look at Richards’s original description of Fimbriaphis (a junior synonym of Ericapahis) in which paper he included a key to separate these two species.  However, he provided information about the alate vivipara of E. scammelli that appears to be incorrect (stating that it has no dark dorsal abdominal sclerite).  So even in 1959 confusion was arising, militating against clear understanding of the species.

Where the state of things sits now is that apparently some of us aphid taxonomists are tempted to think that there are two species that look remarkably similar: one that feeds on Ericaceae (including blueberries), we might call it E. scammelli, and a second species that feeds on Rosaceae (E. fimbriata).  This is a reasonable thing to think; aphids are savvy botanists and tend to be faithful to families of plants.  Based on my study, however, there is not a reliable way to separate these morphologically, and we lack published data on molecular or life cycle studies.  Further, my hunch might be that the populations on Ericaceae in Eastern North America could be a different species from everything occurring in the West.  They seem closely similar, but without more study, I simply think we cannot reliably decide what E. fimbriata encompasses, and the best we might offer is a tentative identification such as Ericaphis “fimbriata/scammelli.”

This is an easily recognized species of Ericaphis in North America because it seems to be faithful to Crataegus (hawthorn, Rosaceae) as host, and because it has 3 pairs of setae on the cauda.  I don’t often write about details of taxonomic characters because that is a big black hole to get in to.   But, this is an exception.  The other species of Ericaphis in North America have 2 pairs of setae on the cauda, which in this group and in Wahlgreniella (more about that genus elsewhere) seems to be a strangely stable character.  Ericaphis gentneri differs further from most other Ericaphis by lacking spinules on the head, and by having sensoria on the antennal segment III.  This species may in fact be related to other species of Ericaphis, but I think this is one of several examples I might write about in which greater knowledge of the diversity of this and related genera, through extensive field work, might be needed to understand the placement of E. gentneri and the reasonable scope of Ericaphis generally (see comments below on apparently undescribed species).

This is one of those species names that simply haunts us years later and contributes little else except being something called an “available name.”  This species was described based on a very small number (description is not clear, but perhaps 2?) of alate viviparae, with no clear evidence that the collection host plant, Symphoricarpos, was a true host (i.e. no reproduction reported).  Given the complexity of species taxonomy in this general group of aphids, recognition of E. harmstoni, based on the two alate viviparae types and the original description, is nearly impossible.  Realistically, the best we might do with this name down the road is decide that the specimens attached to it belong to some understood species and either sink this name in synonymy or resurrect it with a new clear set of specimens and description.  Until such time, my feeling is that this species should be set aside.

I have two samples that I am tempted to call E. lilii, mainly because they are actually from Lilium species, but partly because they fit the key in Blackman and Eastop. Once again, the description by Mason (1940) is inadequate for species recognition, and besides, was based on only 9 alate viviparae and 4 apterous viviparae all from the same place and time.  I remember collecting this aphid from what was probably Lilium columbianum in the Cascade Mountains and thinking that it was recently migrating to that plant from elsewhere.  I have some Ericaphis material from Rosa that seems not to be E. fimbriata or E. wakibae.  Could it be E. lilii? Much work is needed.

I have been fortunate to work with Keith Pike throughout my aphid career.  We have learned aphid taxonomy somewhat in parallel, he getting into it from the perspective of parasitoid wasps, me from potato pest management and then basic biodiversity/evolution.  I remember discussing with Keith what generic placement was appropriate for this rather specialized aphid, and deciding that Ericaphis was probably best.  Because I don’t like long hikes, and have not learned to backpack, I have only seen the host plant of this aphid a couple times (Luetkea lives only at high elevations, often well above timberline).  I have not yet collected the aphid.  But thank goodness Keith was thorough, and I have confidence this is a species distinct from the others in Ericaphis.

In addition to all the complications mentioned above with E. fimbriata, recognition of this species is brought into question by the photo of a mounted specimen in Blackman and Eastop, plate 22f.  This photo shows dark colored legs and siphunculi, which are not the case in specimens I have collected across the continent on Ericaceae (so far: various Vaccinium species in British Columbia, Washington, Oregon, and Idaho; Empetrum nigrum from Maine; Ledum or Kalmia from Quebec; Phyllodoce from Idaho).  My specimens of apterous viviparae have more or less pale siphunculi and legs.  Good chance this discrepancy is an artifact of specimen preparation or slide mounting for the specimen figured on plate 22, but one cannot be sure, hence hesitation in assigning species names to my material.

I agree with the currently accepted notion there are at least 2 species of Ericaphis on Liliaceae and related monocots in western North America.  Identifying any of them as E. scoliopi or E. lilli is made difficult by all the plant taxa I have samples from — apterae, oviparae, and males from Streptopus; fundatrix and apterae from Clintonia; colonizing alatae from Habenaria (Orchidaceae).  Is one or more of these E. scoliopi?  I fear that cannot be determined without comparison to the original types specimens.

In 2018 I had the pleasure of collaborating with colleagues from Poland (Kanturski) and Georgia (Barjadze) in the description of this aphid.  As we wrote what little is known about this distinctive aphid: “The new aphid species is associated with Chamaebatia foliolosa Benth. (Rosaceae). Its sexual morphs and life history are unknown, but probably it is monoecious holocyclic. The aphid species is presumably endemic to California, as is its host plant.”

This is a species that has taken 25 years of study for me to finally come to a point of possible understanding.  It was originally described by Hottes from the plant Pedicularis, and as a junior synonym, from Rosa by Richards (as Placoaphis siphunculata). 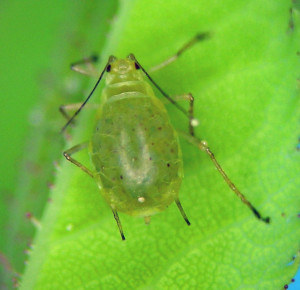 In the wet forests of the Pacific Northwest, this aphid is very common on roses and easily and consistently recognized.  For me the trick has been whether all the many specimens from other plants are conspecific with those from roses.   So far I have specimens that seem to be secondary host forms of E. wakibae from: Circaea (Onagraceae), Goodyera (Orchidaceae), Pedicularis (Orobanchaceae), and Phyllodoce and Vaccinium (Ericaceae).  The connection between the forms on Rosa and these secondary host forms was first suggested to me by Victor Eastop via personal correspondence. 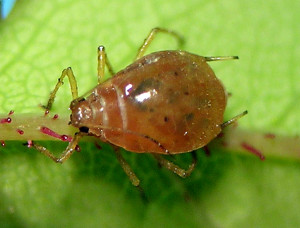 After many more years of collecting and a few hours of study with the microscope, I conclude that Eastop was probably right. 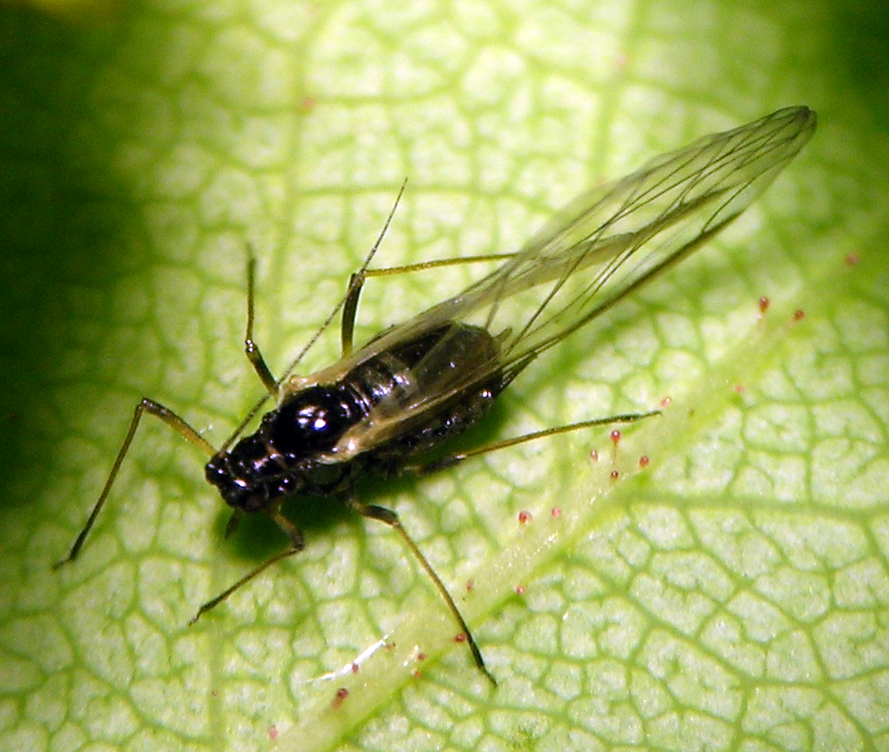 Unidentifiable species not covered above

In 2018 I found an unusual aphid on Vaccinium uliginosum (sensu lato) in bogs at moderate elevations in the Cascade Mountains of Oregon.  It was very small and hardly detectable except by my beating tray collecting technique.  In the field through a hand lens it looked like an Aphis or Rhopalosiphum, with short siphunculi and a moderately long cauda (siphunculi and cauda about equally long).  Slide mounting revealed that it is an Ericaphis but with unusually short appendages.  I collected the fundatrix and apterous vivipara in 2018.  Hopefully in coming years I can secure the other morphs.  The only trick is finding infested plants in places that don’t require getting my boots wet!

For a couple decades I have assumed that this species and A. pterinigrum actually belong to Ericaphis.  The main thing that throws us off with these species is the presence of secondary sensoria on antennal segment III of the apterae.  However, the general appearance in life, spinulation of the head, and the cauda with 2 pairs of lateral setae made me think that these species and Ericaphis go together.  I promised elsewhere not to make nomenclatural changes on my website, so I list these as Aulacorthum on the Ericaphis page.  Ha!

The key to species on Gaultheria in Blackman and Eastop separates A. dorsatum from A. pterinigrum by the wrinkled abdominal dorsum in the latter.  Another character that seems to hold is the lack of spinules dorsally on the antennal tubercles of A. dorsatum.  I have material of this species from British Columbia and Washington, all on Gaultheria.

See my notes on generic placement above.  Also, as noted above, my specimens suggest that Blackman and Eastop are correct to separate A. pterinigrum specimens from A. dorsatum species the way they do.  That said, it seems obvious that they are closely related species.  An important thing to note is that dorsal pigmentation of the apterae is highly variable in both species and cannot be relied upon to identify the species.  I have specimens identified as A. pterinigrum on Gaultheria and Vaccinium from British Columbia, Washington, and Oregon. 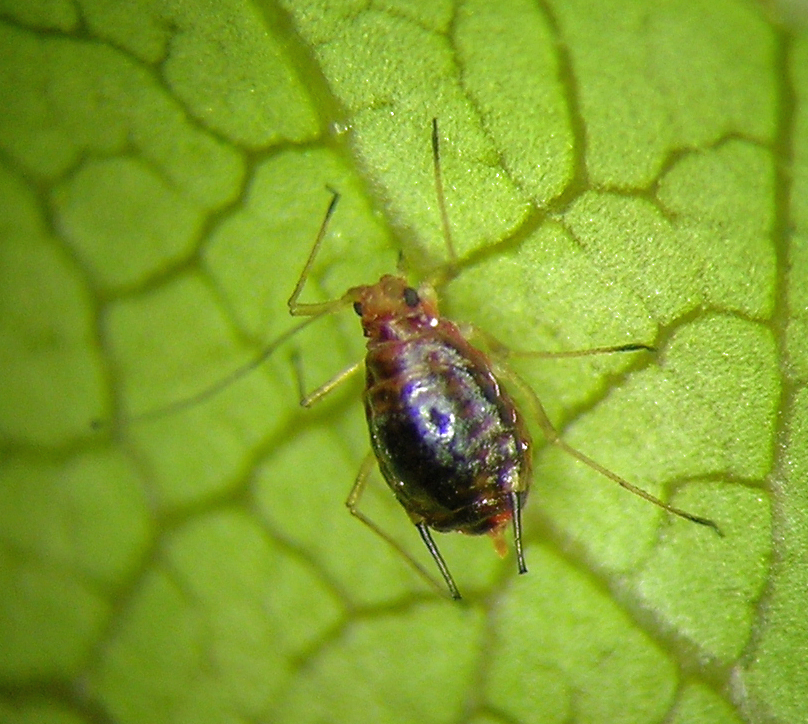 This is probably one of these two “Aulacorthum” species. I picked it up at the Pacific Ocean near Waldport Oregon in early June.