I mount all my aphids in Canada balsam, which is made from the resin of the balsam fir tree.  Following is a description of the procedures, tools, and fluids I use.

Certain taxa of aphids have biochemistry that interferes with some steps in the process (e.g. precipitation of crystals), but just forge ahead with it best as you can, and in the end the results are usually OK. Clove oil can cure a lot of problems in the last step. 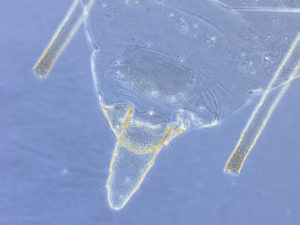 Macrosiphum schimmelum posterior of the abdomen to show good clearing and mounting outcome.

Lye (NaOH) can be found in old fashioned hardware stores, not so much in the mega home improvement stores.  Be careful with it; it’s no joke.  Due to some unreliable lab technician work (by me), I’ve had the opportunity to try 9.1% NaOH, 10% NaOH, and something around 14% NaOH.  I have ended up preferring the 9.1% solution.  The ~14% solution was completely un-usable because the internal parts of the aphids were turned into a stiff gelatinous mass rather than dissolving.  With 10%, this same sort of phenomenon sometimes occurred, depending on the aphid taxa being prepared.  At 9.1% I don’t have such trouble; in some taxa the internal fluids tend to solidify in a different way, creating large rounded crystalline masses.  These, fortunately, dissolve in clove oil at the last step.

Clove oil and orange oil are available at health food stores, and of course online from a plethora of vendors.  I use contact lens storage containers for soaking in clove oil.  These could also be used for the ethanol stages.   The same clove oil can be used for preparation of many specimens.  I replace the clove oil in my contact lens holders after about 100 slides.

I buy Canada balsam from Woodfinishing Enterprises in Wauwatosa, WI. It costs about 10% as much from him as it does from Fisher, VWR, and similar, and his works just as well.  If he doesn’t answer when you call, leave a message (there is no online ordering).  He’ll call back.  In fact, he has even called back when I didn’t leave a message.