This is the most speciose genus of aphids, with over 500.  That is about 10% of all aphid species.  It seems to me to speciate readily in association with host plant species or genera.  My feeling is that there are many species yet to be discovered and/or described, but also that there are many synonymies yet to be discovered and documented.  Some of the latter will undoubtedly be host-alternation biologies that have yet to be elucidated.  I will probably dare to describe a couple species  of Aphis soon; they are pictured below. I also have a beautiful, probably undescribed species, from Sphenosciadium capitellatum (Umbelliferae) in southern Oregon, which has so far evaded good photos due to its habit of getting up and running as soon as its plant is disturbed. 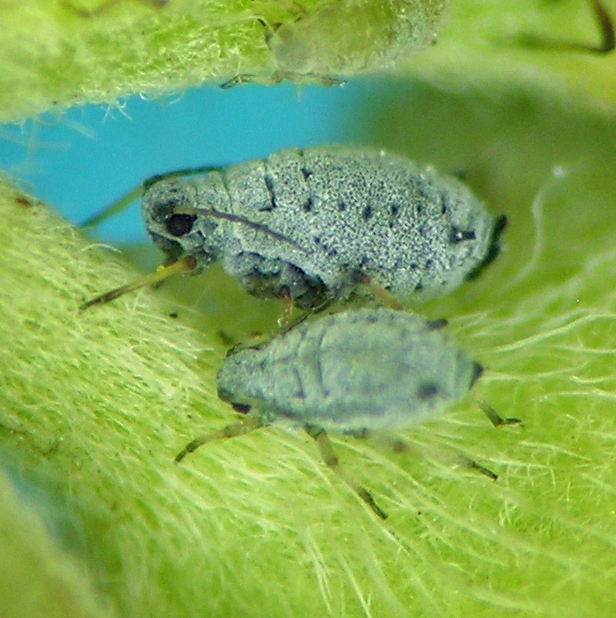 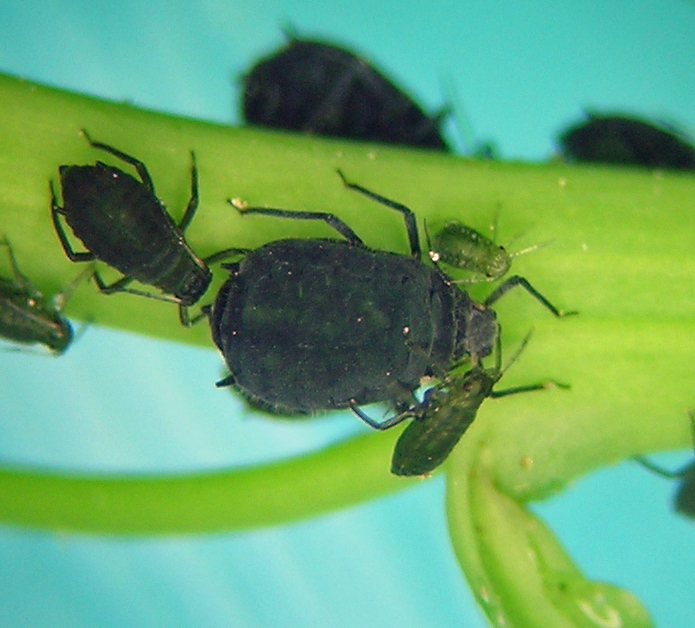 A very unusual Aphis on Mertensia paniculata in southwestern Idaho.

Arguably, this species may belong in the subgenus Bursaphis — it looks like a Bursaphis, and shares the unusual feature of several accessory setae on the ultimate rostral segment.  But, I follow the current practice and list as Aphis sensu stricto.  This species lives on the mint genus Agastache, with an abbreviated life cycle ending in June or July.  I have also collected this species, or something very similar, from Monardella odoratissima, another mint species that interestingly smells almost identical to Agastache urticifolia.  I have material from Washington, Oregon, and Idaho. 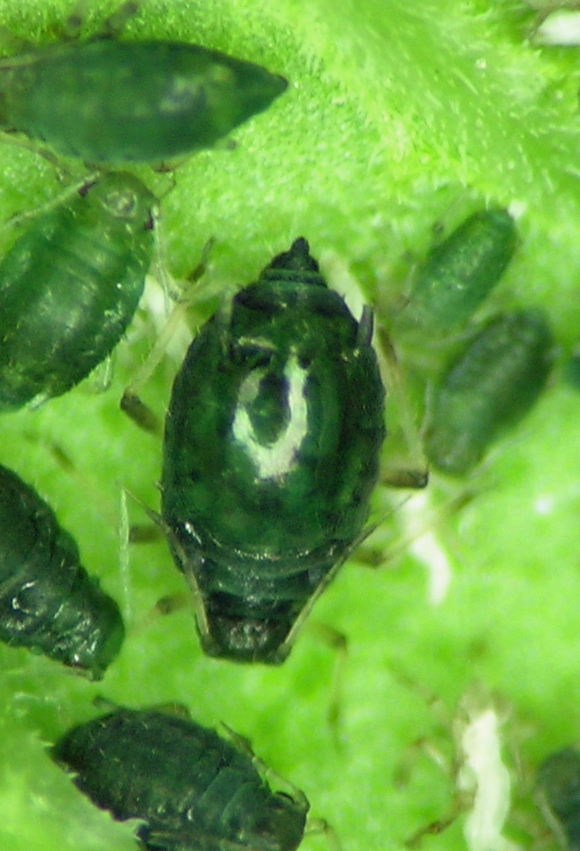 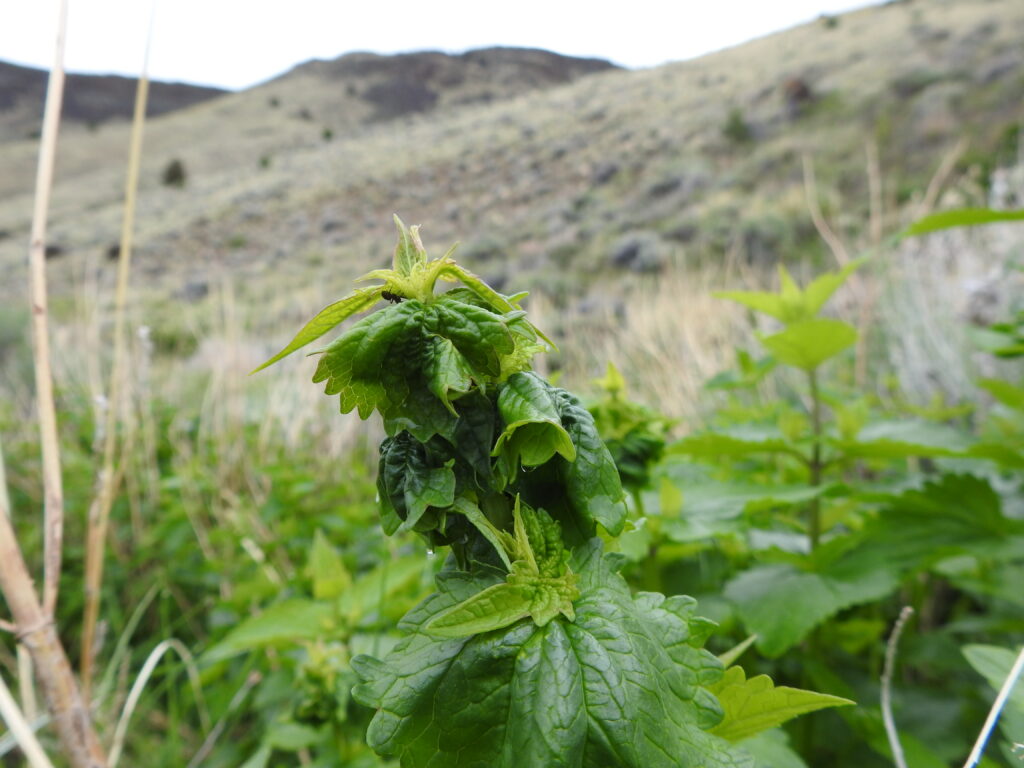 Aphis agastyachyos foliar damage in May 2019 above Lake Abert, Oregon.

This is a species that cannot be missed when collecting in the inland Pacific Northwest, especially the mountains connected to the Rockies and the Sierras. 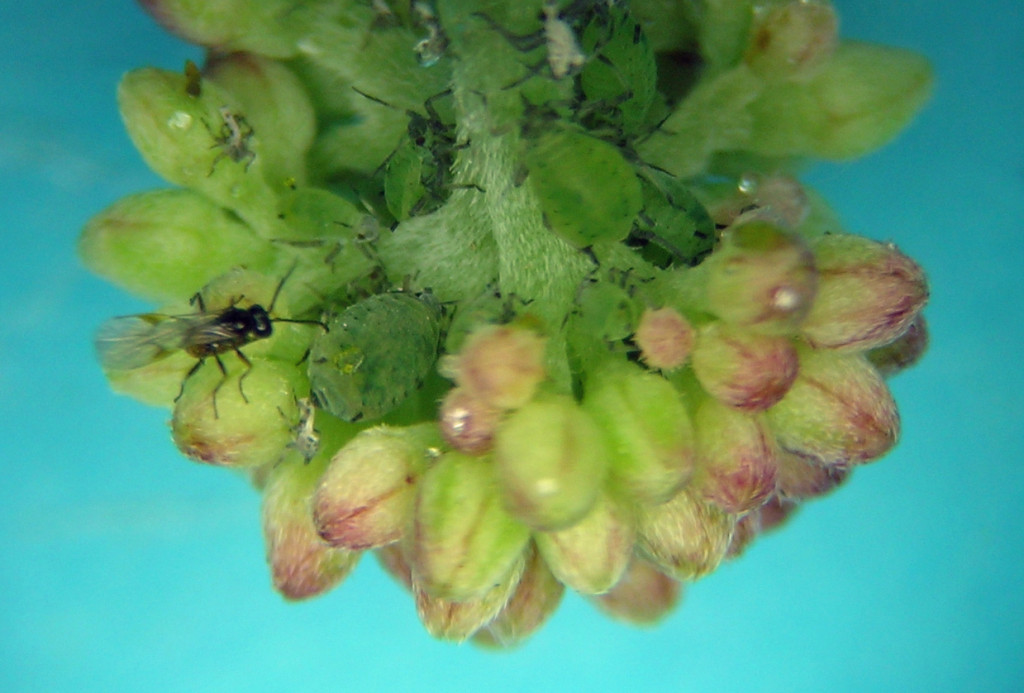 Aphis asclediapis on Cornus (dogwood) at our former house in Idaho. This is the fundatrix being hunted by a parasitoid wasp.

It overwinters on Cornus stolonifera, then migrates to many secondary hosts throughout summer. In the mountains I frequent, this species is analagous to Macrosiphum euphorbiae in that it colonizes many hosts, and a majority of samples of Aphis from high mountain sites and in and near the northern Rocky Mountains seem to be this species. Have a look at my collection database for more details on hosts. 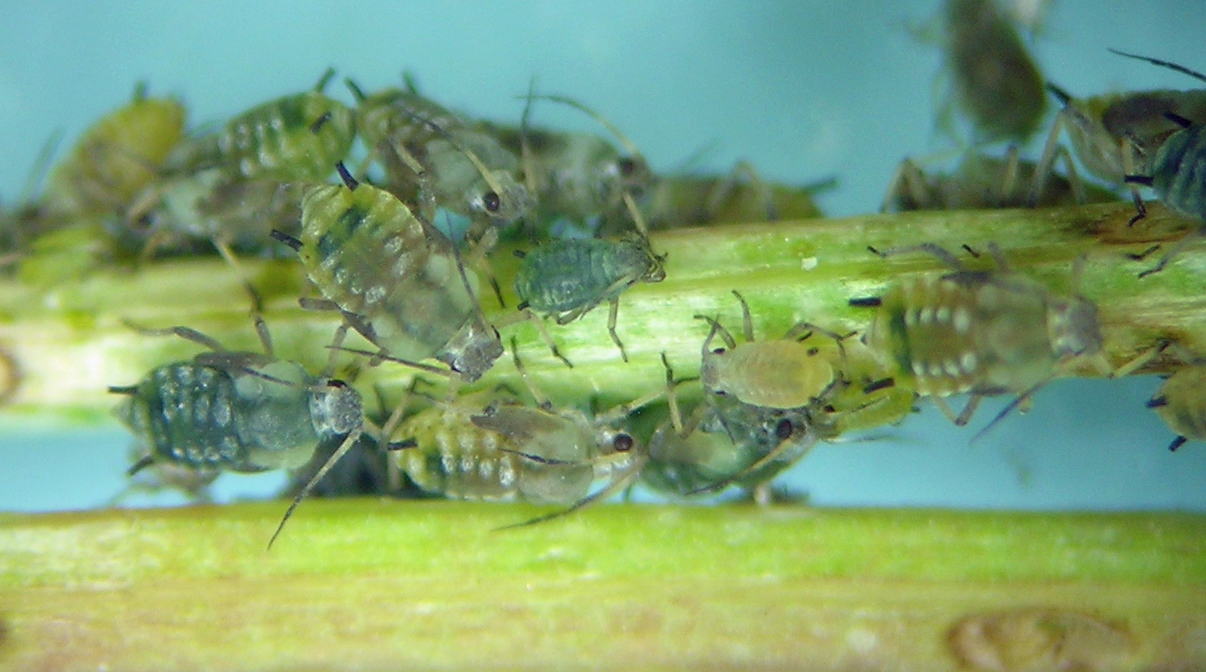 Aphis asclepiadis on Lomatium near Boise, Idaho in May 2015. Note the variable color of these miscellaneous nymphal stages, even within one colony. 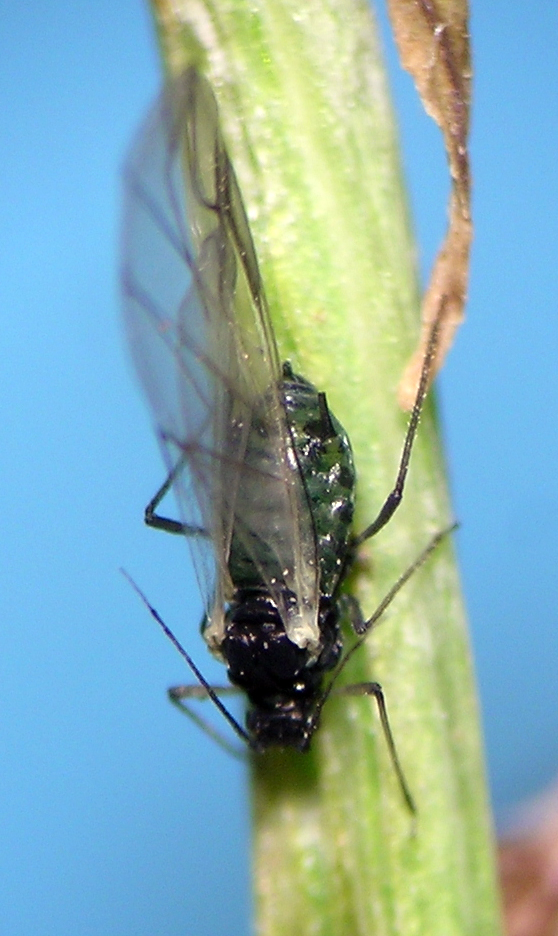 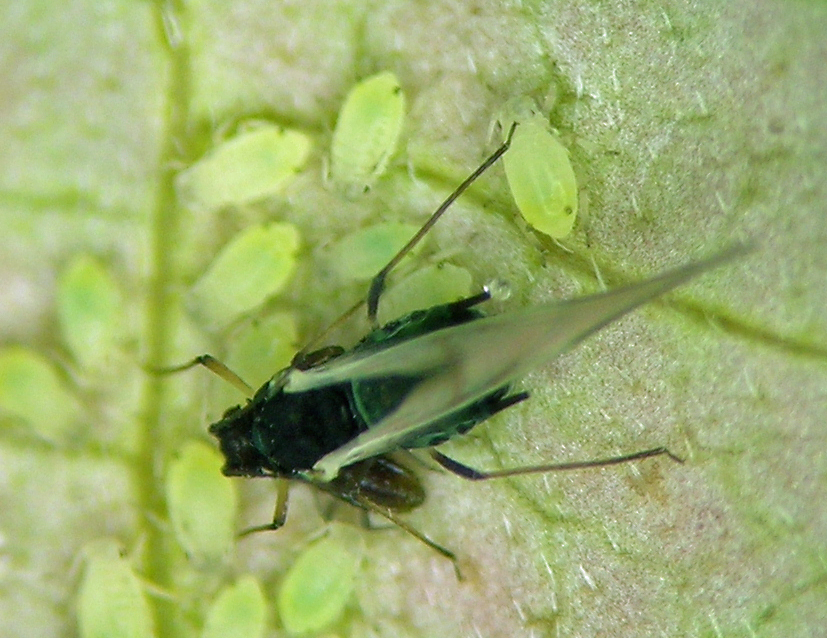 Aphis asclepiadis alate vivipara and her nymphs on Cornus in the fall. 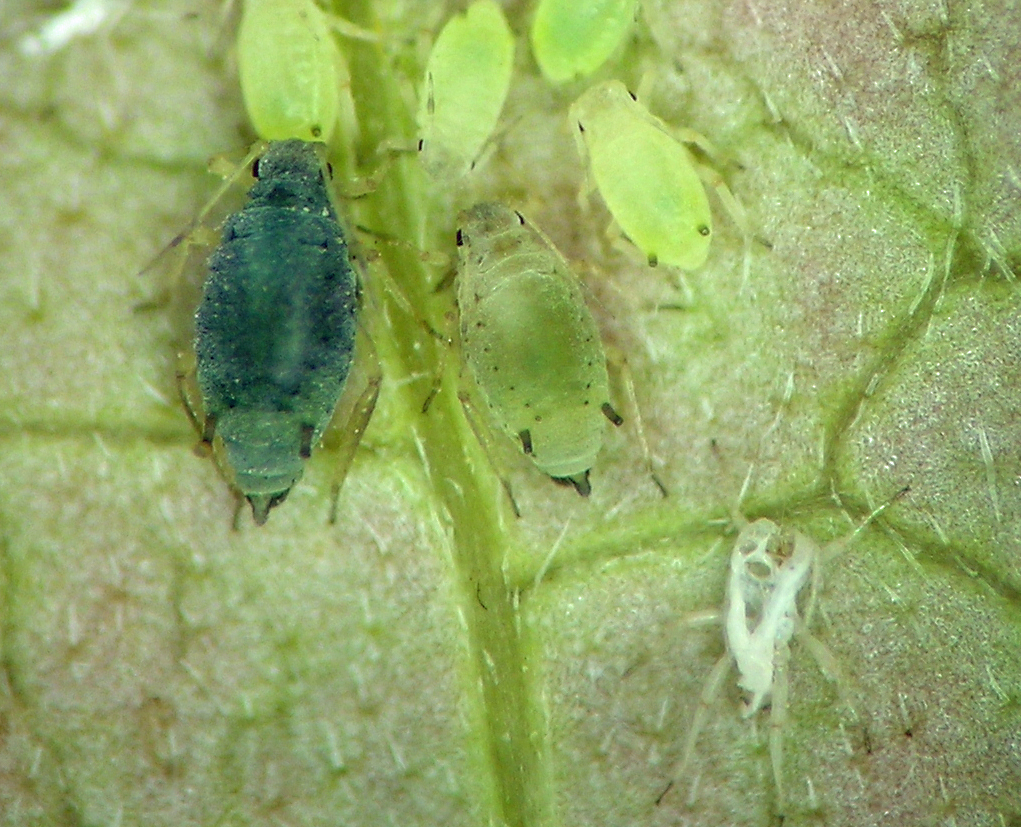 Aphis asclepiadis oviparous female on Cornus in my garden.

This is a common pest aphid, now distributed throughout most of the world. It is known as a crop pest in many places, particularly the tropics and subtropics, but in the north temperate areas I frequent, it is most common on invasive weeds. If you’ve watched old cowboy movies, you’ve probably seen one of Aphis craccivora‘s most common hosts in our areas: tumble weed (also known as Russian thistle, Kali tragus). Most years in the fall, this aphid’s populations explode on Kali tragus as the plant matures. 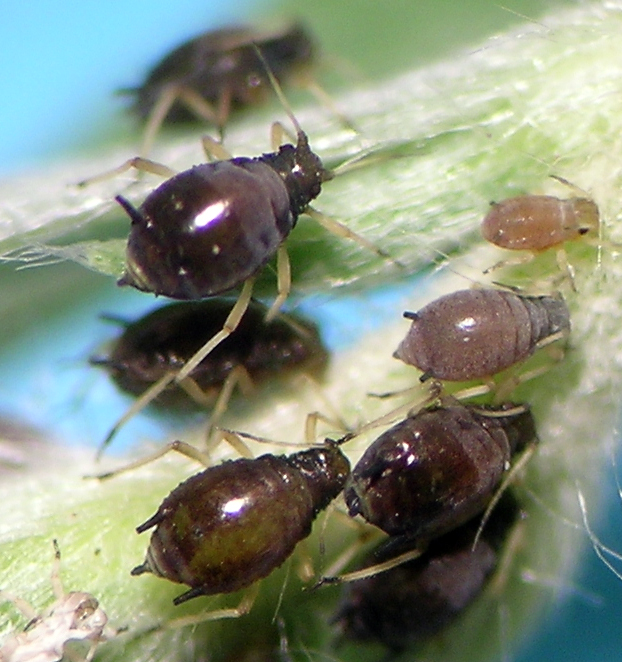 This aphid, also known as black bean aphid, is one of those pest species that is now distributed nearly worldwide. Although it has “bean” in its name, I very rarely see it on legumes of any kind. 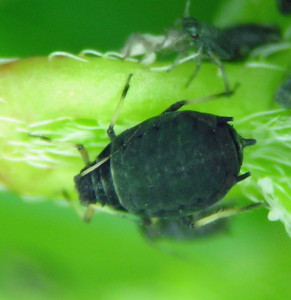 Aphis fabae coming out of overwintering on Philadelphus lewisii in Hells Canyon, Idaho

The A. fabae in western North America seem to fit the categories (subspecies) discussed by Blackman and Eastop that colonize Asteraceae and various other plants. That said, I am skeptical that subspecies defined reasonably well through host plant biology and slight morphological differences in Europe will be particularly meaningful in North America. As a consequence, I file everything in the A. fabae group in one box in my collection.

This is an introduced species that has managed to slot into native plant systems in North America, such as commonly overwintering on native Viburnum and Philadelphus species, and turning up (apparently, if my taxonomy is trustworthy) on things like Valeriana and Veratrum in the mountains. However, the most common habitats for it in my area are still cropping systems and landscapes. 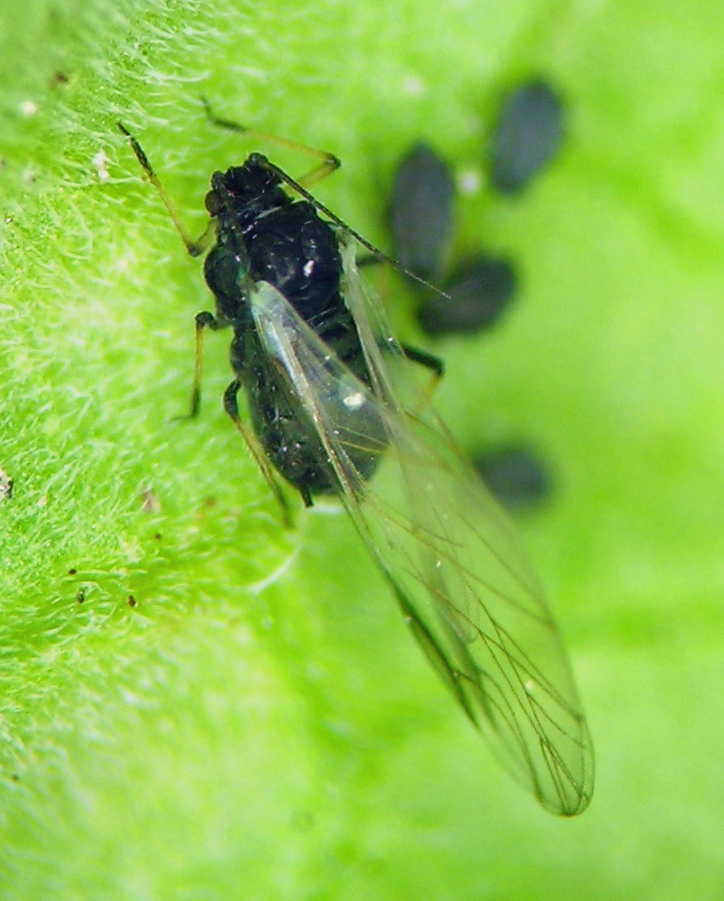 Aphis fabae on tomato in our Idaho garden, colonizing late summer from elsewhere. 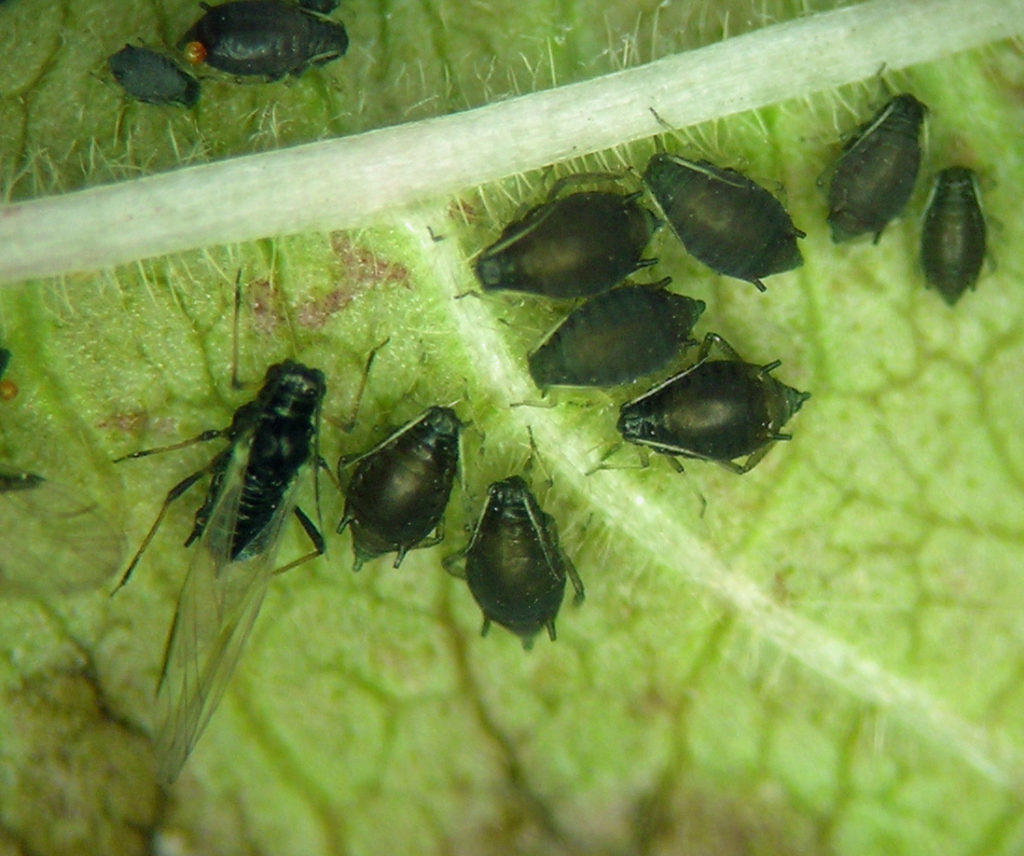 The sexuales of Aphis fabae on Viburnum in our back yard.

A very interesting species, A. farinosa occurs across the entire northern hemisphere in temperate areas, feeding without host alternation on many species of Salix (willow) (it also occurs in Argentina, according to Blackman and Eastop). The biogeography of animals like this intrigues me: native or introduced? How long has it been so widely distributed? And so on.

I have some affection for this species because of its audacious-long siphunculi and its colorful colonies full of oviparae and males by early summer. 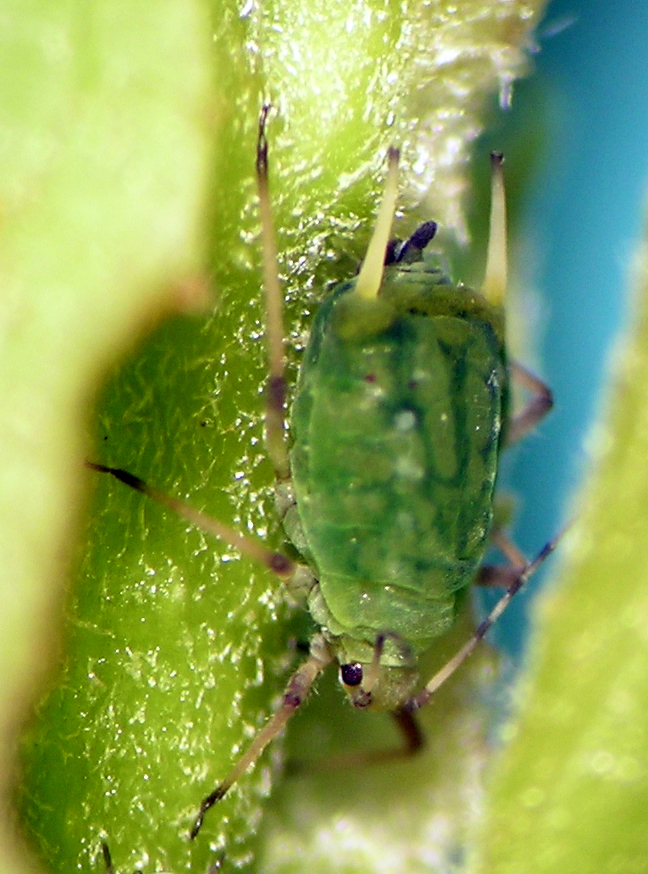 Aphis farinosa from the eastern slopes of the Cascade Mountains of Washington.

This is another pest aphid of almost cosmopolitan distribution, for which I have little affection, also known as cotton aphid and melon aphid. 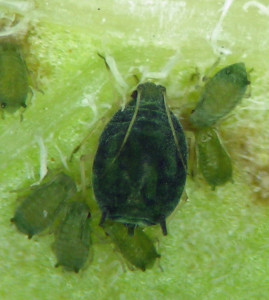 Aphis gossypii from potato in the garden in the fall, immediately before harvest.

In the northern temperate areas I collect, it is relatively uncommon, thank goodness, being far more common and polyphagous in the subtropics and tropics. As you can read in Blackman and Eastop and elsewhere, this species is terribly variable and complicated taxonomically. Although some want to split it into several species, my relative isolation from major collections and biological study of the species in the field both lead me to lump specimens in my collection. 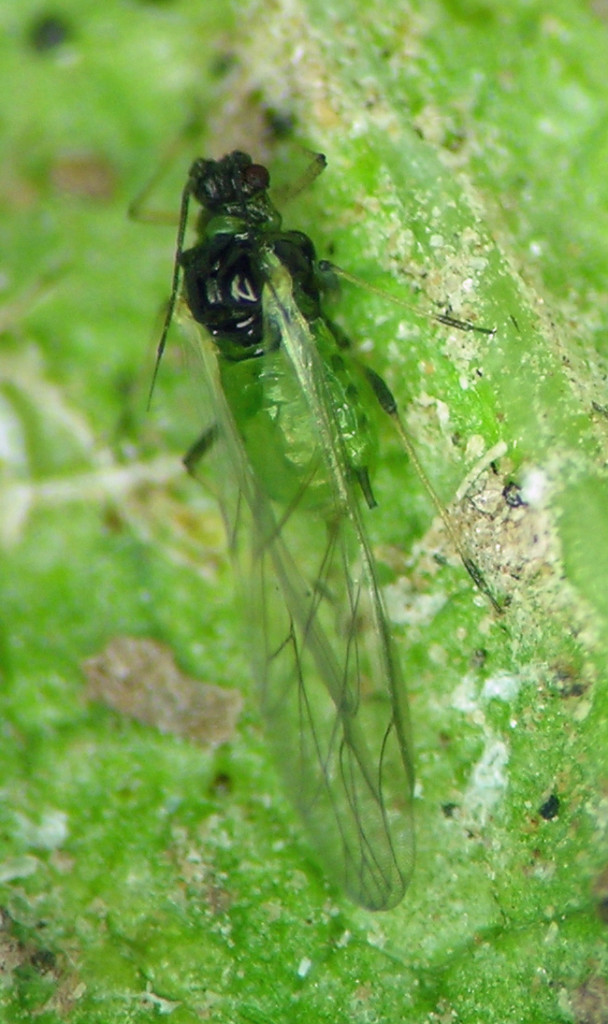 Aphis gossypii alate vivipara on an ornamental Geranium in the garden.

As you can see from just the photos presented here, A. gossypii varies a lot in color and appearance. I have seen it almost white, and so tiny that adults were far under 1 mm in length. Walk through a place like Orlando, Florida or San Antonio, Texas, and A. gossypii is likely to be the main aphid living on ornamentals, including the smallest herbs to fully expanded leaves of trees. During my postdoc years at the USNM, identification of aphids intercepted at ports of entry was generally a long string of A. gossypii and Myzus persicae, occasionally punctuated with something else.

In our Idaho garden, it seemed to appear only late in the summer and fall, colonizing several different plants, apparently flying in from elsewhere. 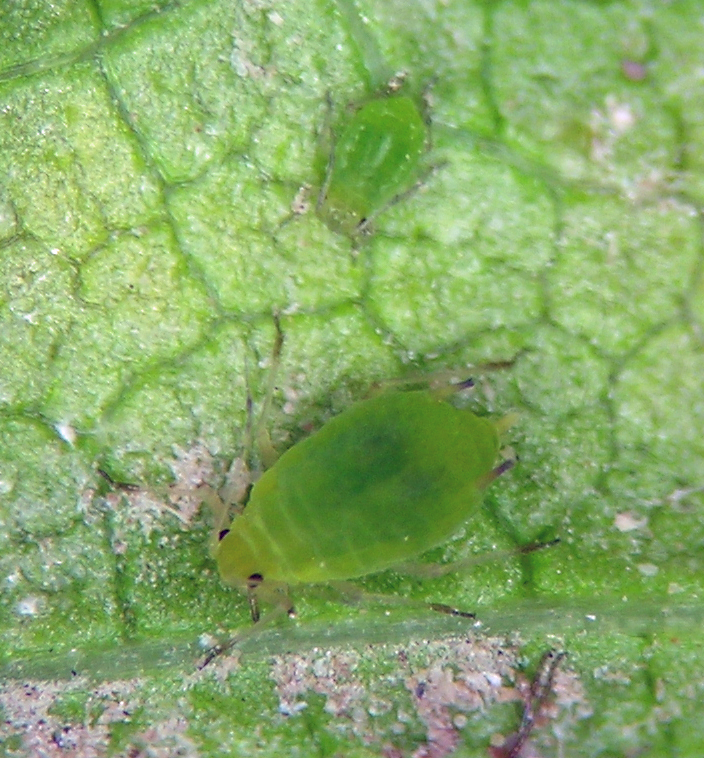 Aphis gossypii on Geranium in the garden. 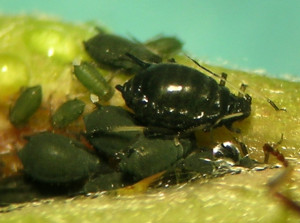 This species is a real puzzle for me, the dogma being that it is monoecious holocyclic, yet I suspect a host alternation of at least some of the Aphis that appear to be this species that live on Holodiscus species (ocean spray). One possibility is that there are two or more species being slotted into this name, or, that host alternation is indeed facultative. The latter life cycle trait is not unknown in aphids. 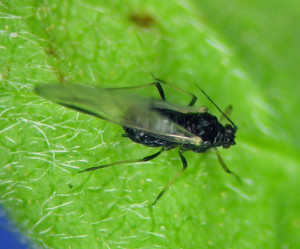 Aphis holodisci alate from the Blue Mountains in Oregon.

I have now accumulated lots of evidence, including host transfers in 2018 and 2019, supporting the idea that this species is the main one that colonizes Veratrum across much of the western U.S. (there are at least 2 species of Aphis on Veratrum). So, I may have to sink this name in synonymy with Aphis coweni. We’ll see, since I have to look at some types first.  I hope to complete a paper on aphids of Holodiscus in the coming couple years that will officially document this. 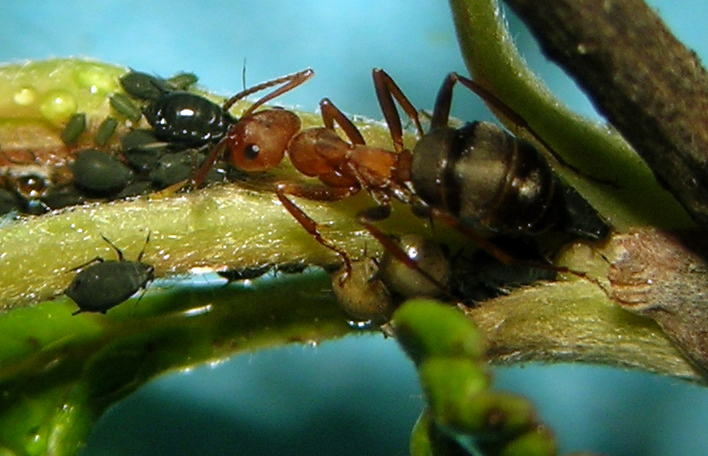 Aphis holodisci from northern Idaho being tended by a lovely ant.

As noted by Blackman and Eastop, more than 500 species of Aphis are currently recognized. 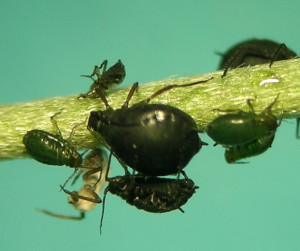 That’s a lot– about 10% of all aphid species. One phenomenon I’ve observed over the years is that some Aphis species seem to come and go; some years a given species will seem to be everywhere its host grows, then for years afterward it seems to be incredibly rare. That is the case with A. lupini. I have only seen it a few times in all the years I’ve looked at Lupinus in the west, yet in a couple years it has been very common. In fact, in one year I found a population of what appeared to be this species that was bright orange like Aphis nerii. As noted in the photo, this is a species with wingless (apterous) males. 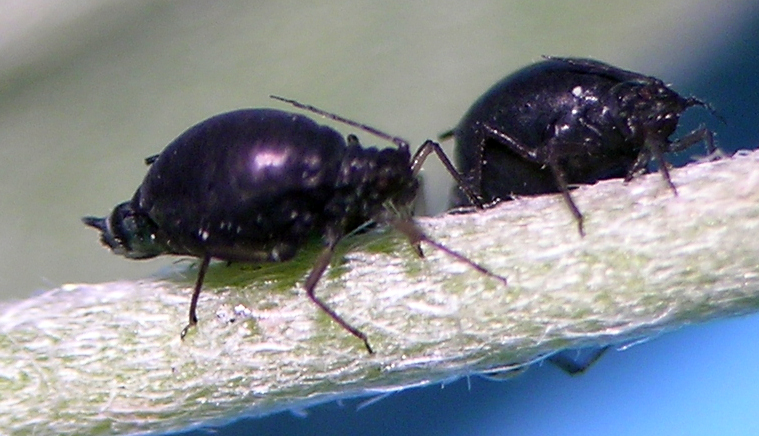 With about 10% of all aphids in the genus Aphis, that’s a lot. This is yet another species that is fairly easy to recognize if you know the host (Cornus stolonifera) and the broad geography. It seems to live throughout the season on this plant. It occurs widely in North America and I have collected it in Oregon, Idaho, Montana, and Wisconsin. 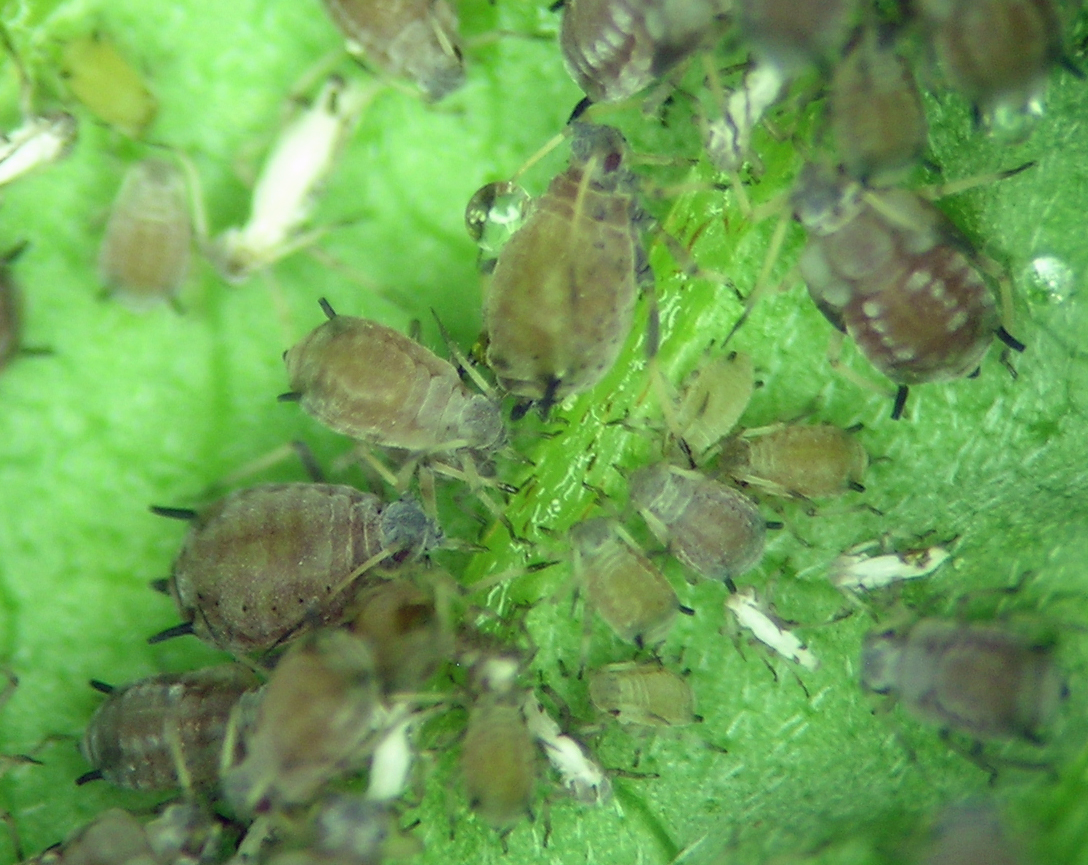 Aphis neogillettei in the Blue Mountains of Oregon.

This species I have collected here and there for a long time, and sometimes confusing it with Aphis asclepiadis, which also feeds on Penstemon in the mountains of western North America. This is one of many aphids that is most recognizable in life because of a color pattern that is entirely in the internal tissues that dissolve in the slide-mounting process. In the photo here, the distinctive dark blotch in the anterior abdomen is unusual and diagnostic. 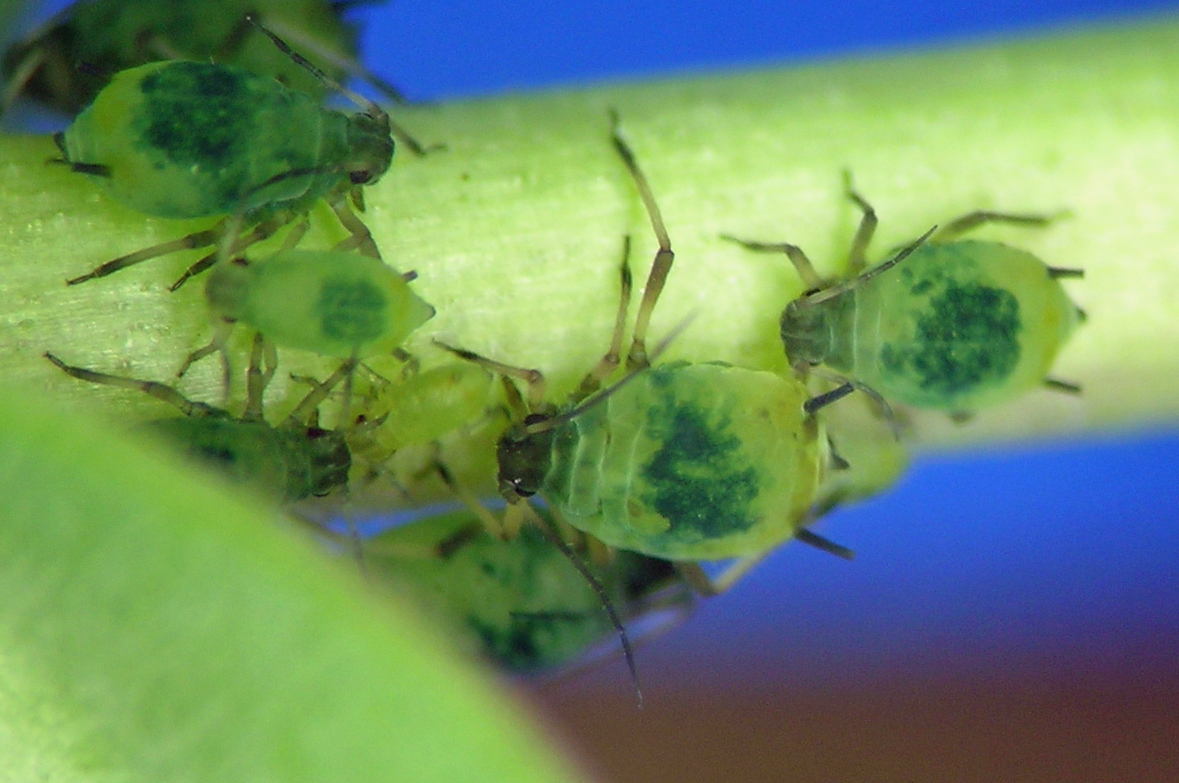 Aphis pentstemonicola in the mountains of central Idaho.

For many years this aphid was an exciting find, because although I looked at lots of Phacelia, this species of aphid was rarely found.  During the 2016 season I found that it can reasonably consistently be found on Phacelia in the spring growing in dry disturbed soil such as south-facing road-cuts, recent timber harvest, etc.  It is monoecious and I suspect it has an abbreviated life cycle, but have not been able to demonstrate the latter. 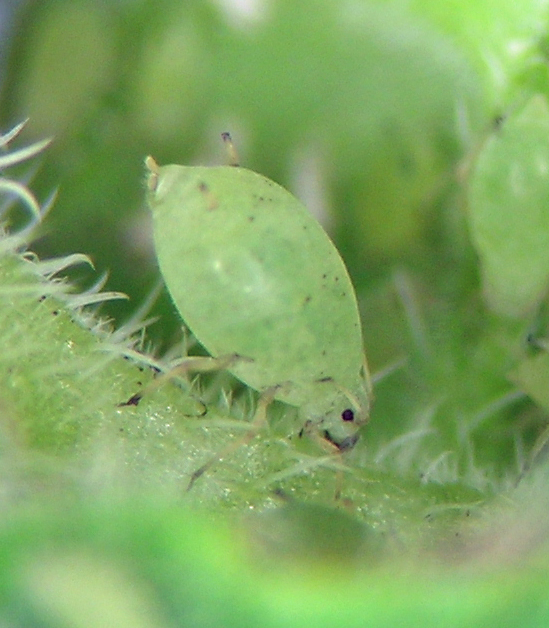 This is the common pest on cultivated apples in my region, and finally last year I was able to get some decent photos of it on my backyard trees.  Interestingly, ants were tending the aphids and successfully maintained massive numbers of aphids on the trees all summer. 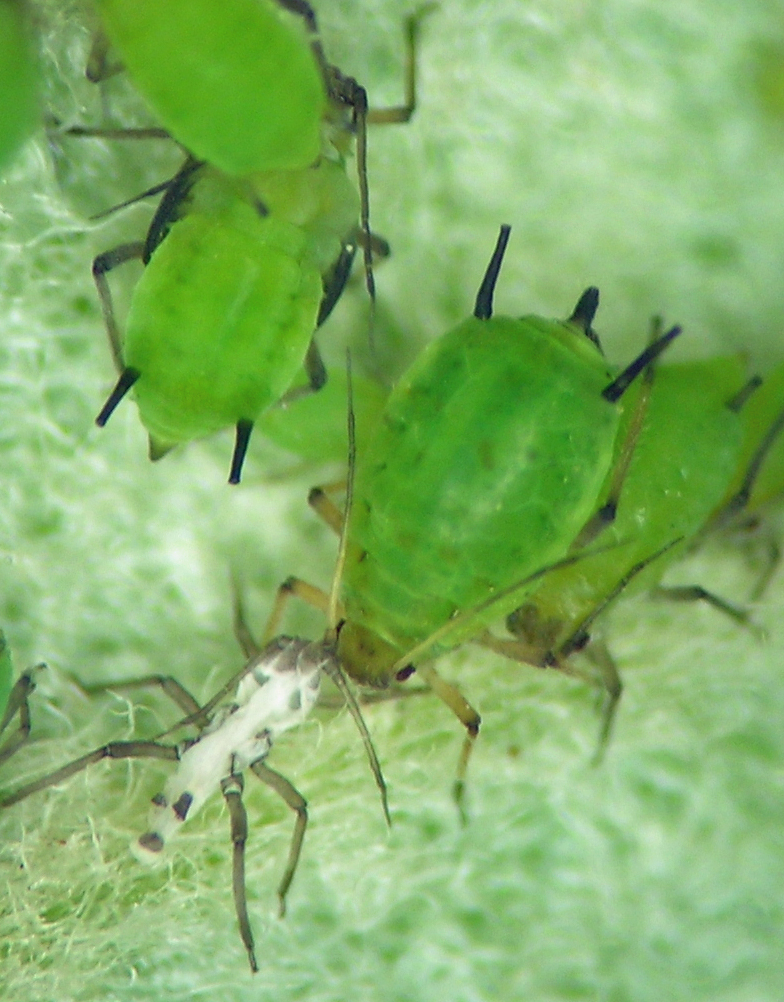 This is a fairly common species on blackberries, genus Rubus, in western North America where we lurk. The trick to finding it is that it can be very small indeed, with adult apterae commonly less than 1 mm long. I say it’s common, yet I have only 2 samples in my collection. The reason is likely that I often pass by common species without collecting them. I am trying to break this habit at least to some degree. 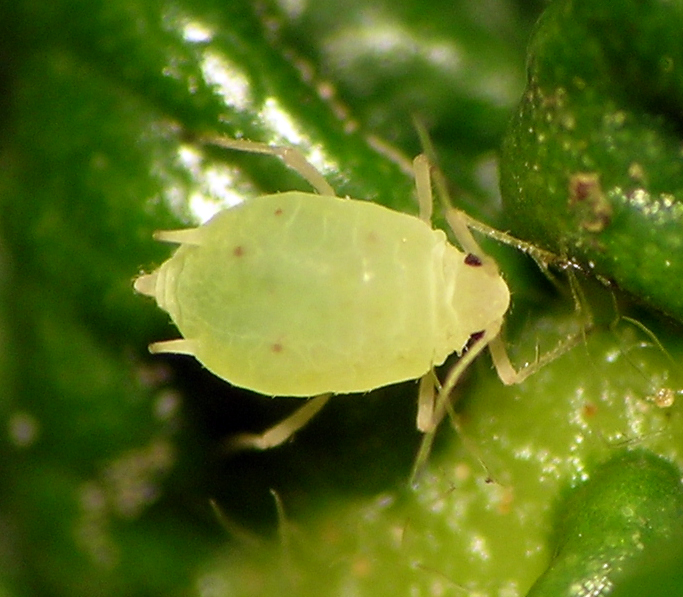 Aphis rubifolii from the San Juan Islands of Washington.

Travel almost anywhere in temperate, subtropical, and tropical Earth and this species is there. 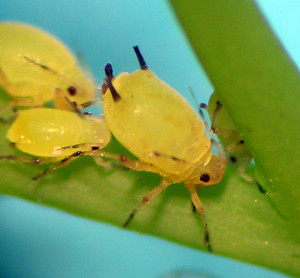 I usually carry a couple vials when traveling to Florida, Arizona, or Texas for work-related trips in winter. When really desperate to make a winter aphid collection, I can almost always find this species in these southern states. In the Northwest it can be incredibly abundant on ornamental Spiraea and is sometimes one of the most commonly trapped aphids in agricultural areas. It lived throughout the season in our Idaho garden on various ornamental Rosaceae. It can be a nice apple-green to bright yellow. 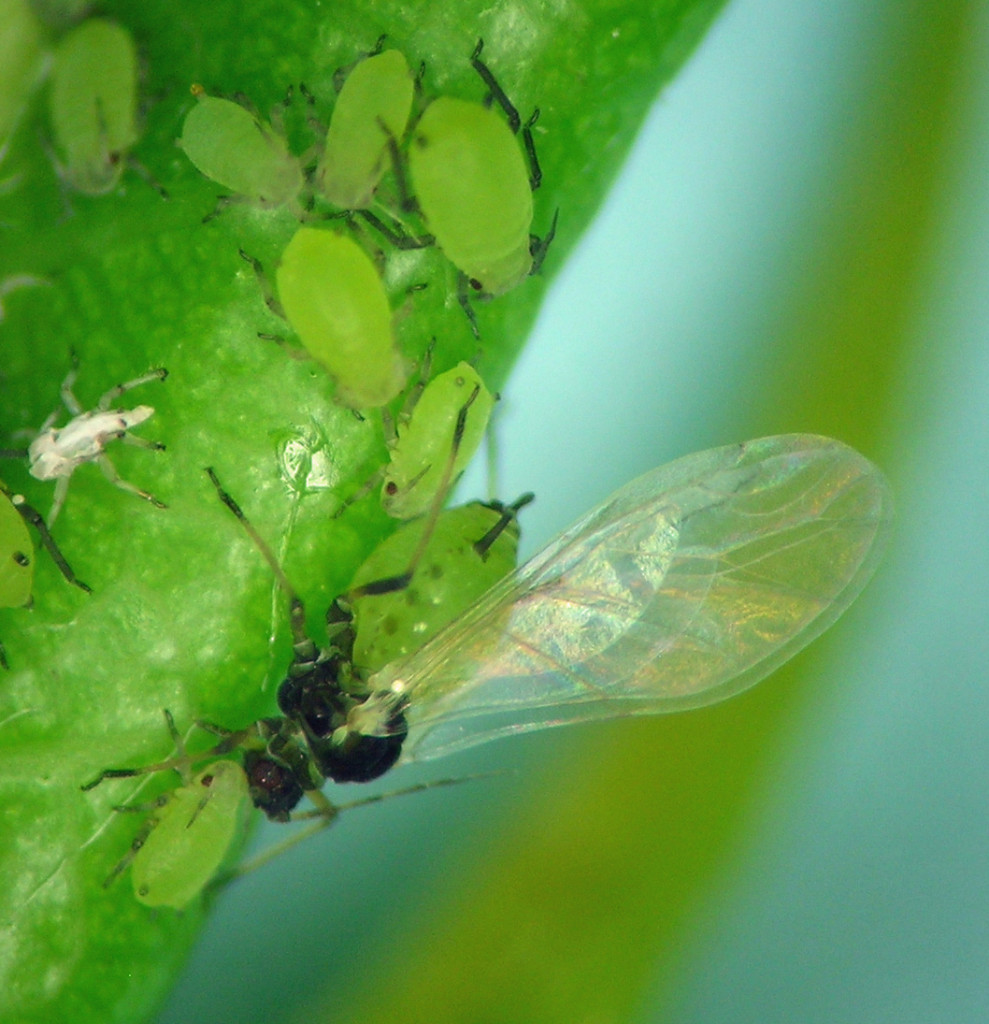 Aphis spiraecola from ornamental pear shoots in our garden, Idaho.