This is one of the groups I study extensively in the field, and puzzle over in the lab.  It is almost entirely North American and is likely very closely related to Macrosiphum; in fact the two genera might be better thought of as a mish-mash of similar species haphazardly assigned to genera based on a possibly trivial character, i.e. clavate siphunculi.  But as you’ll see from careful study, some species placed in Macrosiphum have clavate siphunculi as well.  So what gives?  Hard to say.  Probably extensive field work and fresh collections for DNA analysis would be required to clarify the genus-level classification.  Meanwhile, there are many cool and easily recognized species of Illinoia to enjoy in the field.

The 2017 collecting season was very productive for me in terms of Illinoia.  During winter of 2018 I therefore spent some time sorting many of the unidentified Illinoia from many hosts.  One main accomplishment was deciding what to consider as Illinoia thalictri MacGillivray.  I knew I had at least two species of the genus from Thalictrum, but had not taken the time to decide which should be considered I. thalictri.  See below for a photo and an account of this species.  Some of the highlights of my collection work are listed immediately below, and the re-arrangements and species name assignments were be reflected in the slide collection database when the 2018 version was released.

Unidentified species on Holodiscus, ocean spray: for many years I have been collecting undescribed Illinoia from Holodiscus all across the western U.S. and Canada.  Upon careful study, it now appears that there may be two undescribed species involved, one that lives on the ‘dumosus’ category of Holodiscus as listed in Flora of the Pacific Northwest (Online searching suggests that ‘dumosus’ is no longer an accepted name in this genus, and that there is apparently disagreement about how to classify the various shapes and habitat-specific forms of Holodiscus across the west. Based on information presented on www.efloras.org, what I have called ‘dumosus’ over the years might now be considered Holodiscus microphyllus.) that is apparently monoecious, with apterous males, and another that feeds on the more typical large-leafed version of Holodiscus discolor.  It is possible that the second of these is simply the spiraeae/macgillivrayae complex discussed below. 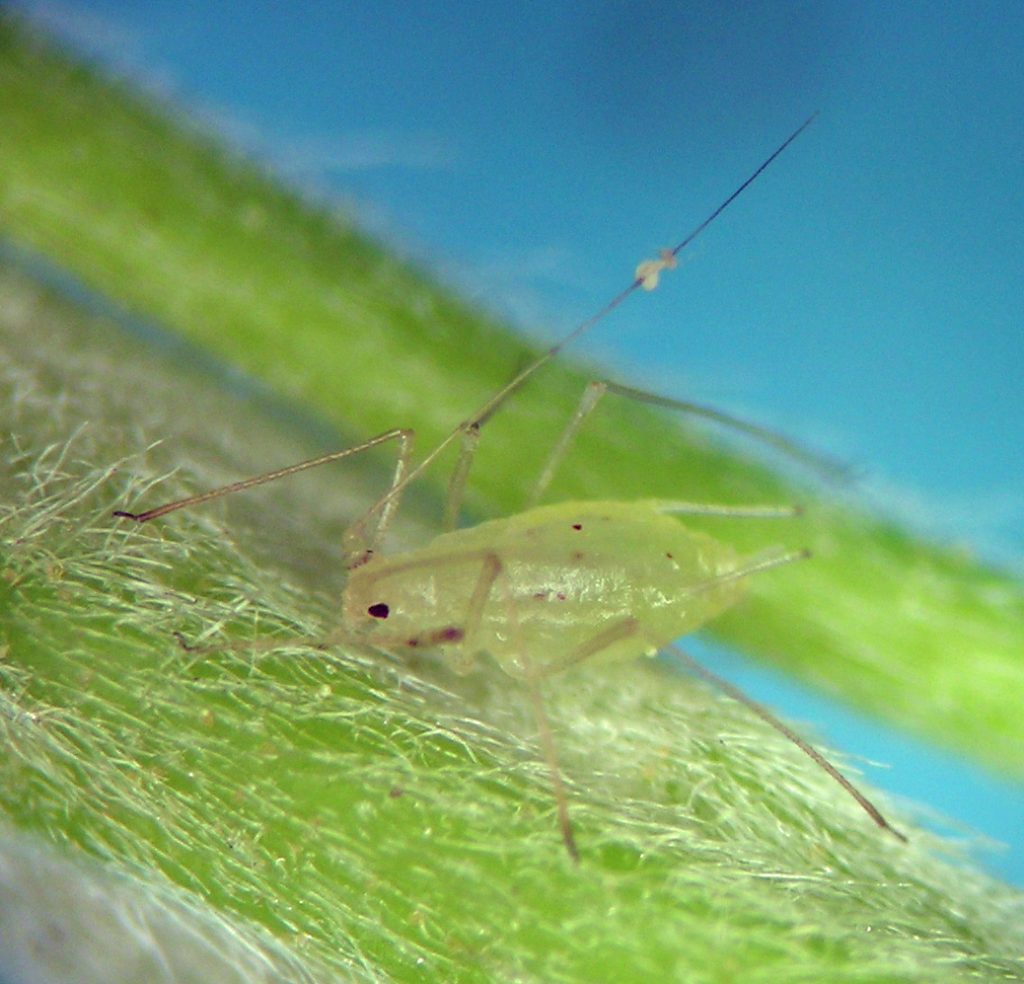 Unidentified species on Chamaebatiaria millefolium, fern bush: when I first found aphids on this plant in SE Idaho in 2015, I wrote Acyrthosiphon on the label due to the more or less cylindrical siphunculi without reticulation.  Since that time I have collected this apparently single species in a few places in California and Nevada.  In some samples the apterous viviparae have a couple rows of reticulation on the siphunculi, and the male and alate vivipara I have possess distinct reticulations and look like more typical Illinoia.  In other respects the range of variation and the unusual features of the aphid suggest that a single species is involved.  One of the unusual features is the long siphunculi, slightly outwardly curved, with swelling near the apex, and a trend of 1-3 small setae near the base in the larger specimens.  These features of the siphunculi are similar to Acyrthosiphon macrosiphon Wilson.

This is an unusual species of Illinoia, with some unusual morphological features, such as the almost annular imbrications on the antennae, the almost lack of reticulations on the siphunculi, and the spinulose imbrications on those siphunculi.  Also, it is an unusually fast running aphid when disturbed on its Ceanothus host plants.  It is monoecious holocyclic, feeding on at least a couple species of Ceanothus (e.g. C. velutinum and C. cordulatus).  I have tapped on hundreds and hundreds of Ceanothus bushes over the years, and am satisfied that this aphid is quite rare in most places I’ve traveled.  I have samples from Washington, Oregon, Idaho, and California. 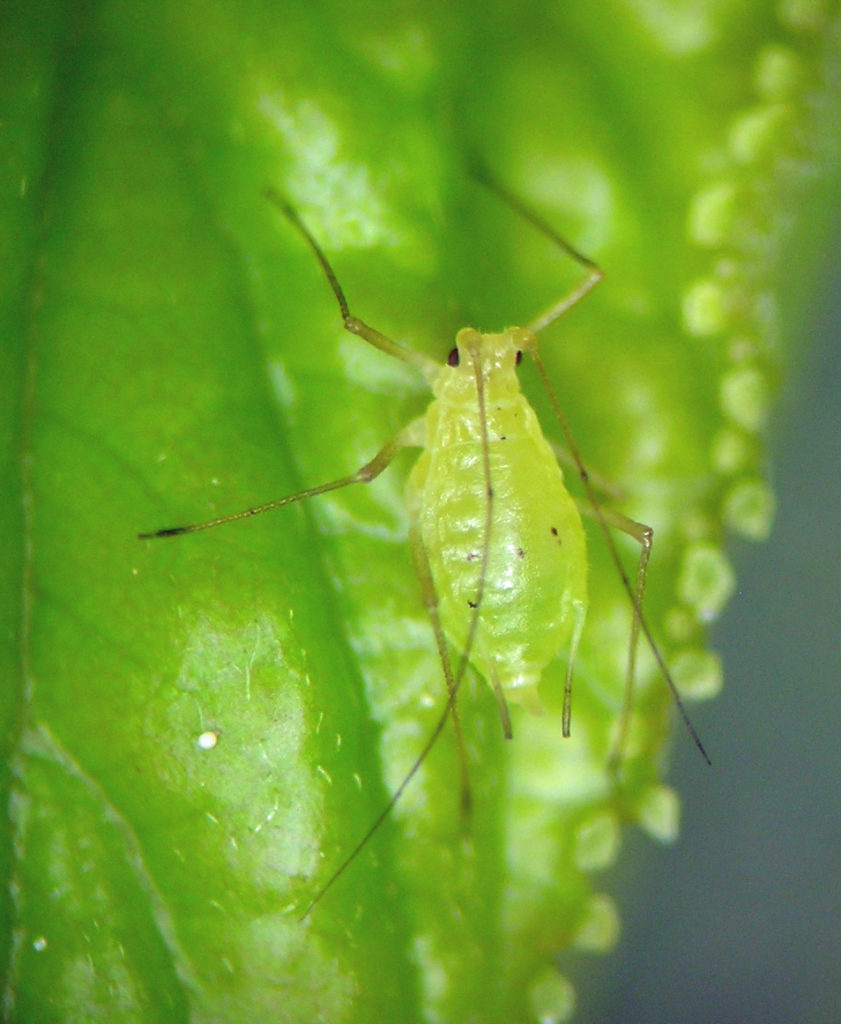 I have pursued this aphid for over 2 decades, and only collected it several times on Corylus.  I have a fundatrix, some apterae and some alatae from Corylus that I identify as this species. 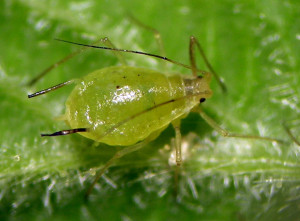 That said, there is some concern that what I see developing on Corylus in the spring may actually be a different species, such as I. macgillivrayae (see below).  I agree that some of my specimens may have fewer setae on the ultimate rostral segment than is expected in I. corylina, and that the situation of native Illinoia on shrubs in western North America is unclear.  Nonetheless, I file a range of things under this species, including many Illinoia collected on Aquilegia (columbine) in natural systems.  The latter host association was suggested by other specialists many years ago, and I suspect they were correct.  This species will continue to be a subject of my study for years to come.  I have this ‘species’ from Washington, Oregon, and California. 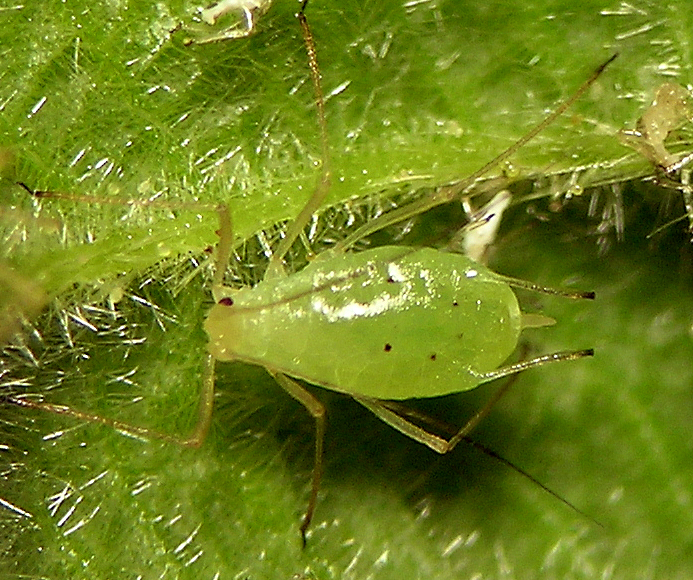 I have a lot of affection for this species, and have pursued it avidly in the field for 20 years.  It lives on one of our native honeysuckles, Lonicera involucrata (a host whose berries were described as inedible and possibly poisonous, “but they are so disgusting that there is little chance of anyone eating enough to worry.”  Plants of the Rocky Mountain Region).   My gut feeling (forgive the pun) is that this species belongs to a Caprifoliaceae-associated lineage that includes Macrosiphum stanleyi, Macrosiphum raysmithi, Macrosiphum diervillae, Macrosiphum schimmelum, and a few others.  This is another research topic I invite others to pursue.  It’s a very interesting biogeographical puzzle.  I so far have this species from the ocean to rather high mountains; states/provinces include: British Columbia, Washington, Oregon, Idaho, and Colorado. 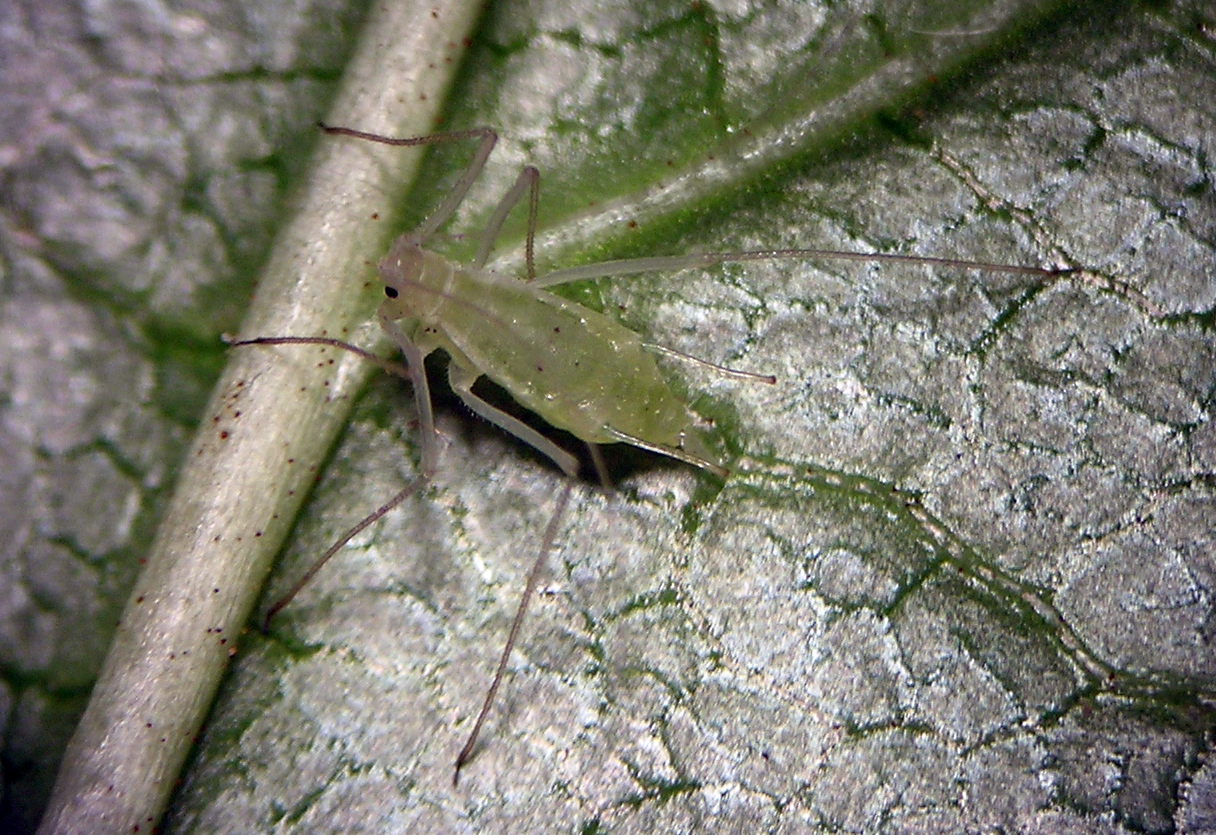 This is one of apparently two common Illinoia sensu stricto species that live on Asteraceae (the other being I. grindeliae).  I have collected it on several different hosts, but the place I was most able to study it and collect all its life cycle stages was on Solidago on the shores of Moses Lake in central Washington.  I have fundatrices, oviparae, and alate males from Solidago.  My specimens are from: Washington, Oregon, Idaho, Montana, Utah, Colorado, and Wyoming. 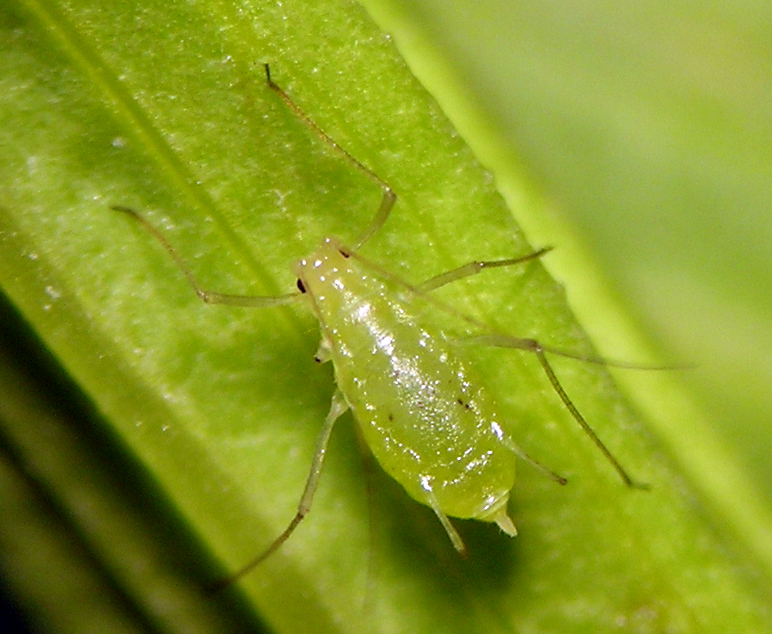 This is a beautiful aphid that can be found on Rubus parviflorus (thimbleberry) in the moist parts of northwestern North America. As noted by Blackman and Eastop, it has an abbreviated life cycle and is monoecious on this shrub. I have samples from British Columbia, Washington, Oregon, and California. 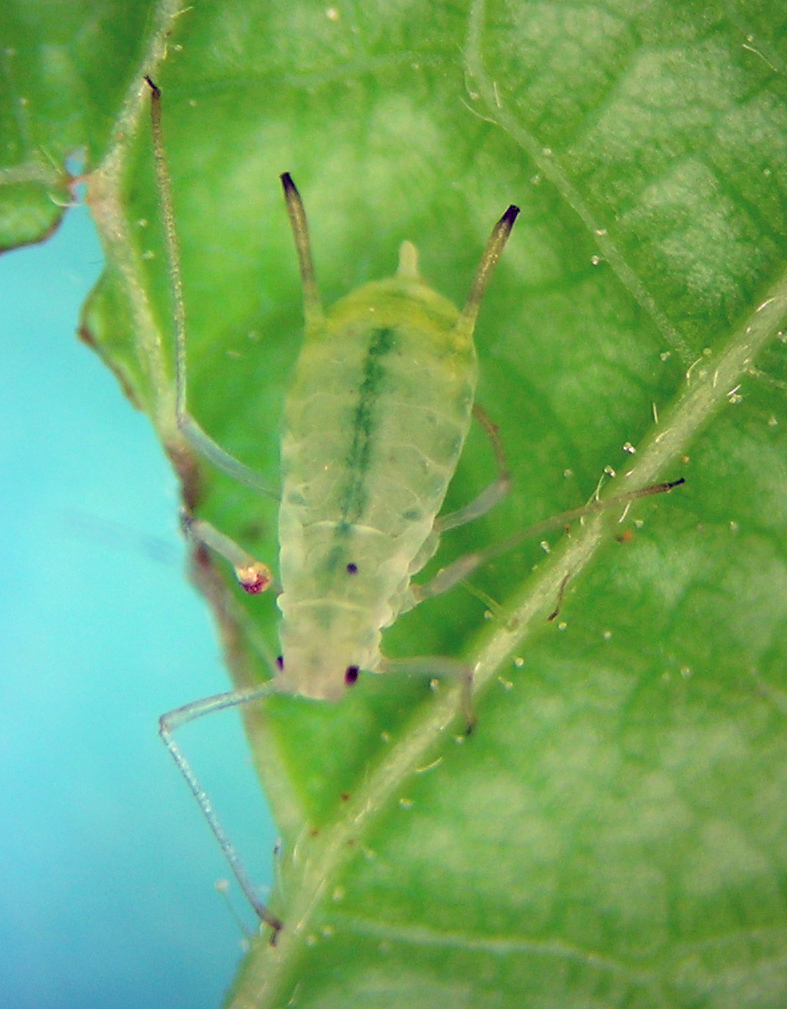 Illinoia maxima aptera in the coastal area of Oregon, near the Nehalem River. 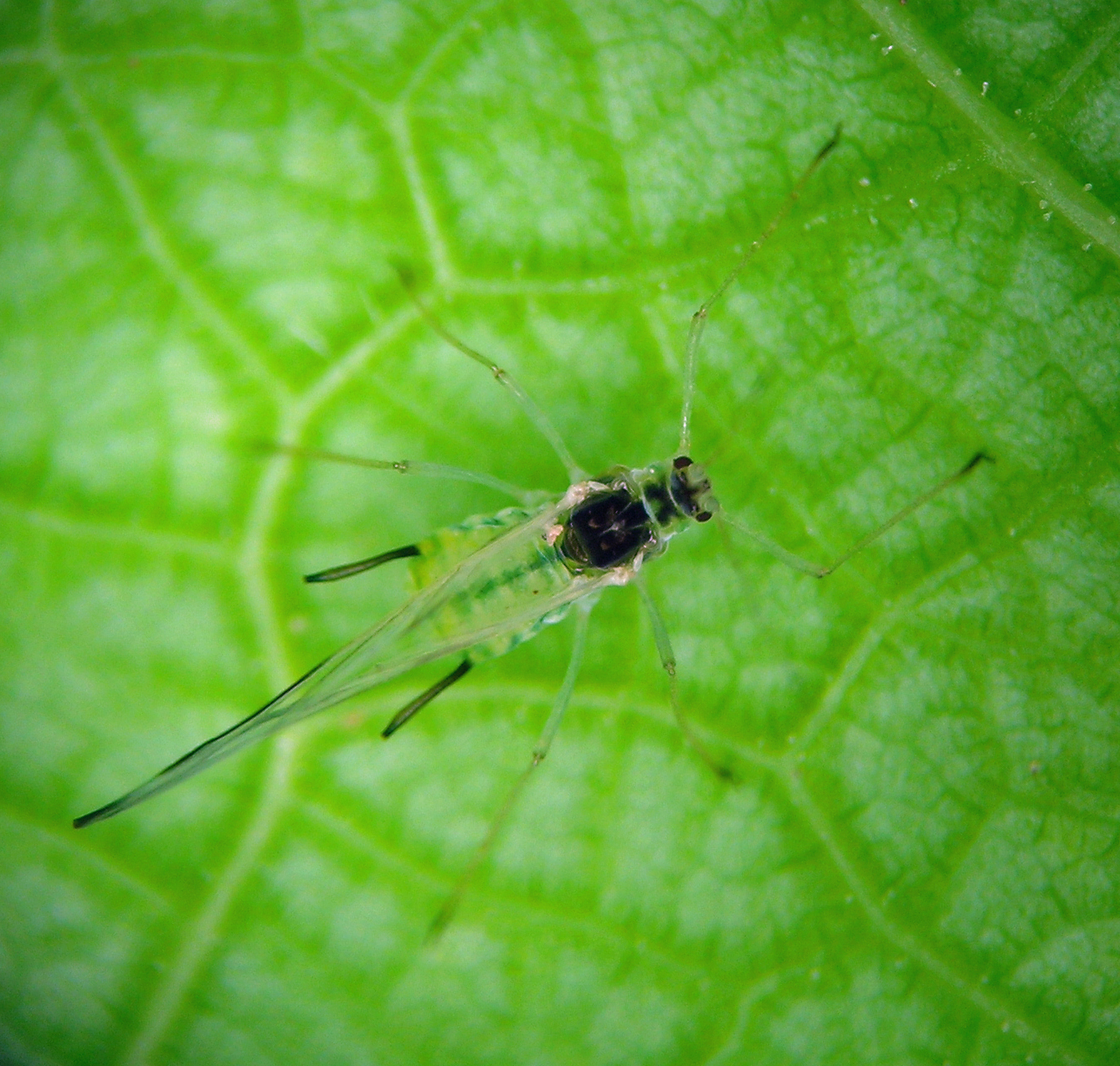 This is an interesting species that is an example of an ‘Illinoia‘ with little to no swelling in the siphunculi.  It is also unusual in that it causes discoloration of the leaves on which it feeds (host being Menziesia ferruginea, Ericaceae).  Once I learnt to recognize Menziesia from among all the other nondescript shrubs in northern Idaho, this aphid was easy to find.  Another interesting tidbit is that the specimens collected on Menziesia near the ocean coast in Oregon’s Tillamook County differ rather markedly in morphology from specimens collected east of the Cascade Range in Washington, Idaho, and Montana; the leaf discoloration symptom of infestation was the same.  More study might determine that two species are involved. 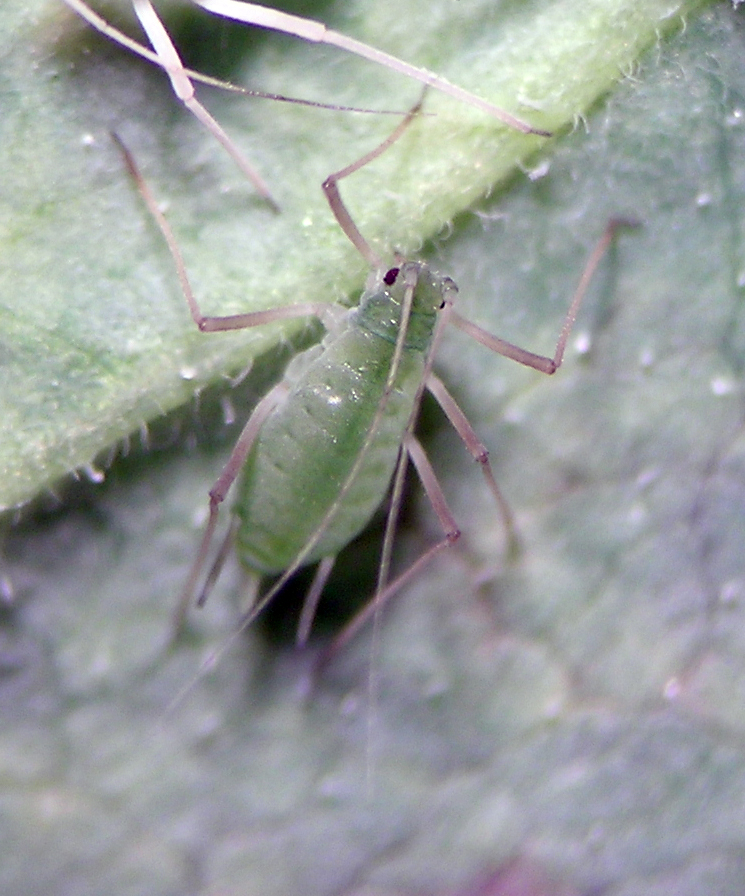 Illinoia menziesiae aptera from northern Idaho along the Pack River.

This aphid is common and easy to find on its host Anaphalis margaritacea (Asteraceae).  It has an impressively large, apparently natural distribution that reflects the distribution of its host across North America.  I have specimens from Washington, Oregon, Idaho, Utah, Colorado, and Quebec. 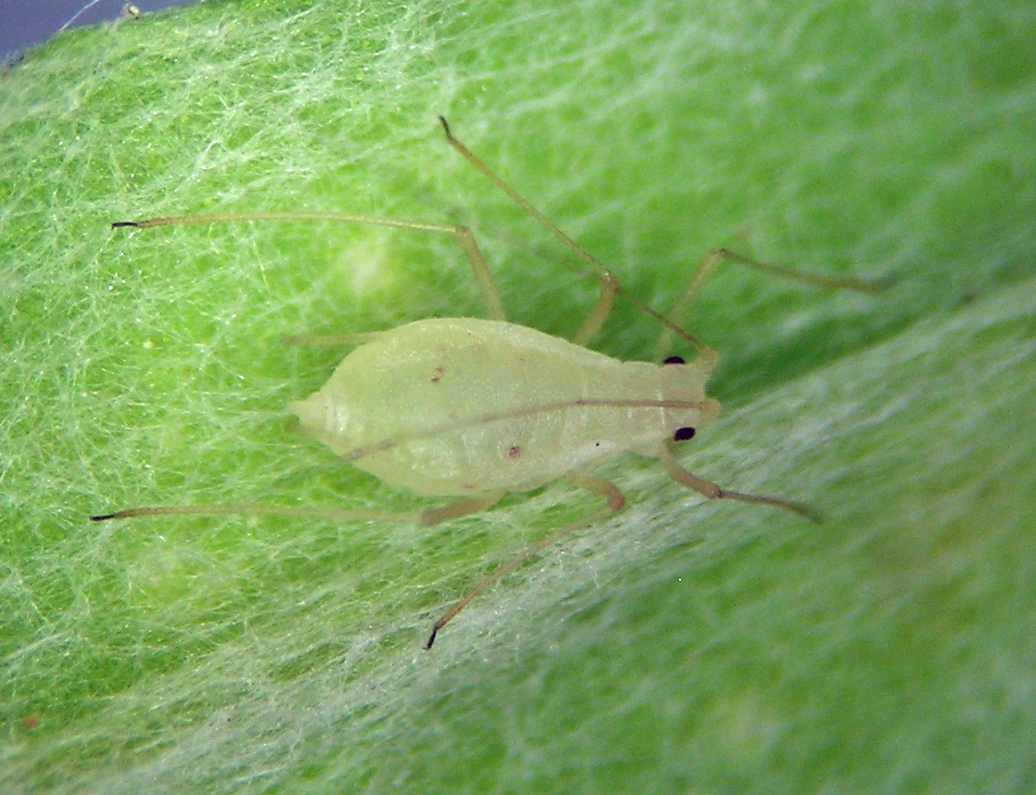 Illinoia richardsi from the Eagle Cap Mountains of eastern Oregon.

In my collection I group specimens together that might be identified as either I. macgillivrayae or I. spiraeae (in fact, several of the species known from Ericaceae are also very difficult to recognize when looking at the full range of material at hand).  The reason for this is that, although I get the general trend in size of ultimate rostral segment and cauda that is used to separate these species, their distribution and broad host range almost completely overlap.  This means separating the species is troublesome at best, and may be misguided if all these specimens in fact represent only one species.  Illinoia in this general group are common in the mountains in Washington, Oregon, and Idaho.  Alates can be abundant and found colonizing a wide range of plants on which they may or may not be able to complete development.  The latter fact makes it hard to know the full host range of these Illinoia aphids, but here is a start on the list (update from winter of 2018, and another run at sorting this material was just as frustrating and resulted in what appears to be a continuous range of variation in features of the siphunculi, cauda, and rostrum):

Hypericaceae: Hypericum (an Illinoia is commonly found in the Pacific Northwest on invasive and ornamental Hypericum)

Ranunculaceae: Aquilegia, Thalictrum (there is quite a lot of material from both of these genera from a few U.S. states)

Rosaceae: Amelanchier, Crataegus, Geum, Holodiscus (there is at least one other distinct and apparently undescribed Illinoia on Holodiscus), Prunus, Sorbus, Spiraea

Here’s a crazy idea: what if there are a few closely related heteroecious species in western North America migrating from trees and shrubs to various herbs?  Primary hosts might be as follows, based on the common-ness of samples in my collection:

It seems like either something like this is the case, or there is one variable polyphagous species that lives on woody and herbaceous plants in several families across the whole west. 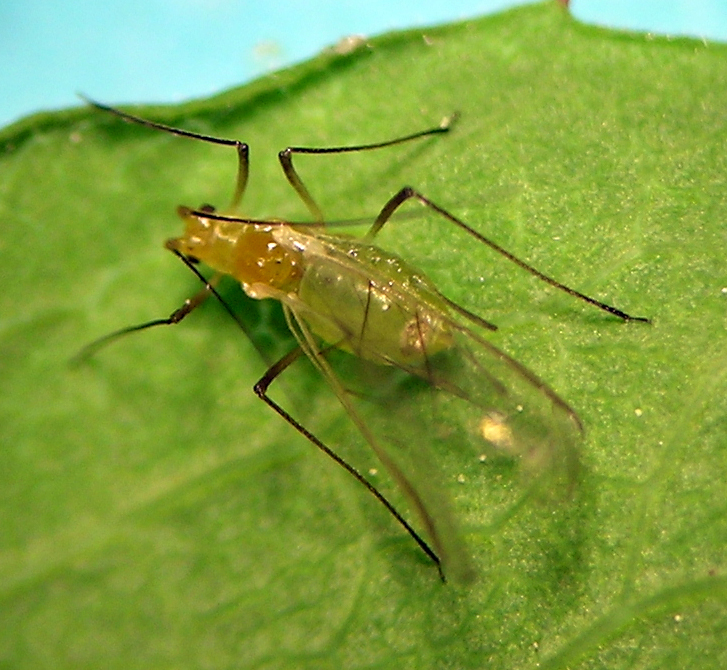 Illinoia from Spiraea in the Blue Mountains of Oregon.

During winter of 2018 I sorted through my many slides of material of Illinoia collected from Thalictrum all across the west.  I had intentionally been saving material from this host until I had samples from many locations and times of year, allowing better-informed decisions about which samples represent I. thalictri.  In the end, my samples from the Rocky Mountain region seem to group together based on a relatively short ultimate rostral segment, and seem to comport with the idea of I. thalictri laid out by MacGillivray.  Therefore, I added species names to quite a few slides.  In some regions closer to the Pacific Ocean, Illinoia from Thalictrum have a markedly longer ultimate rostral segment and pretty clearly a different species, possibly in the Illinoia macgillivrayae/spiraeae group mentioned above. I’ve now identified this species from Idaho, Utah, Colorado, New Mexico, and Arizona. 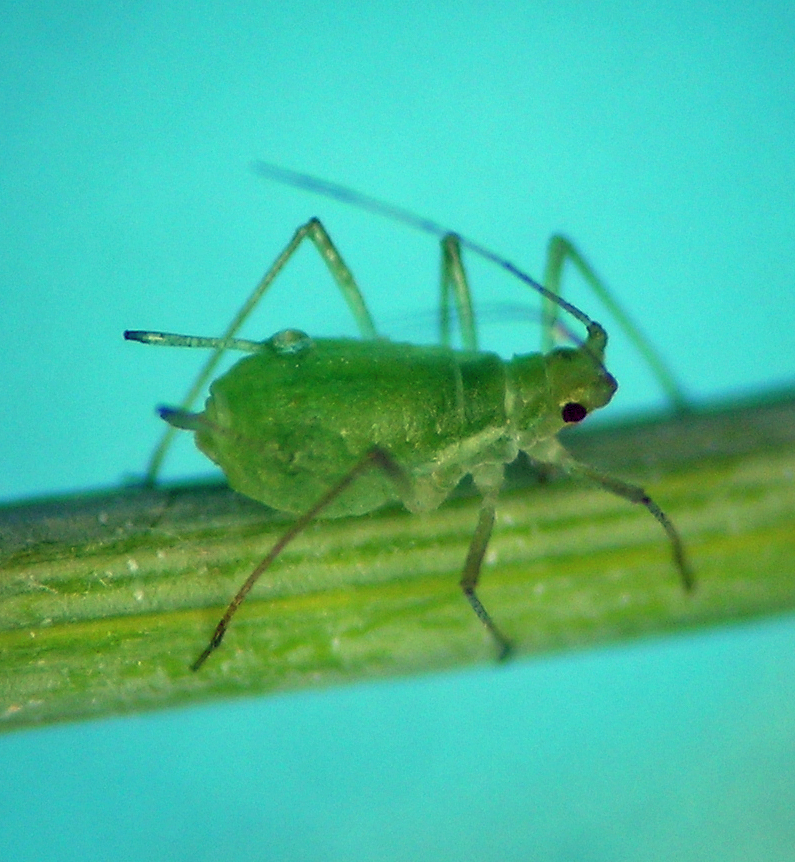