This is an easily recognized genus for a small but unknown number of species.  As noted by Blackman and Eastop, “most species are poorly known.” 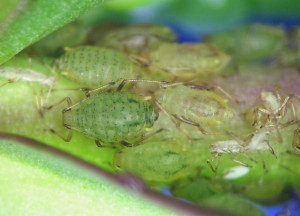 A species of Nearctaphis from Penstemon in the Trinity Mountain range of Idaho. This keys to Nearctaphis bakeri, but was present on Penstemon far too early in the season to be that species, which is heteroeceous. Spring was just starting at this site, and the Penstemon was just beginning to grow and was far from blooming.

Another case of understatement.  In my collection I somewhat confidently identify three species, plus I have less confidently assigned a handful of slides to other species.  All the others I have turned to separation based on “morphospecies” without assigning published names.  I have been avidly collecting Nearctaphis for over 20 years, and will continue to do so.  Perhaps if I live another 30 years, there will be enough material to revise the genus (maybe sooner for someone smarter than me).  During winter of 2018 I examined all my Nearctaphis material other than N. sensoriata, added species names to some N. bakeri and N. kachena slides (see below for some new thoughts and information on the latter), and refined my sorting of everything else to morphospecies.  There are definitely quite a few separate-able species in Oregon and nearby states!  In most cases I am still not trying to put species names on slides because I have only a few slides of each group, and usually only alate viviparae.  That is simply not enough material to characterize a ‘species’ in my mind.

This is a very common species that has become a pest of cultivated Trifolium.  I collect it frequently on its Rosaceae primary hosts, especially on ornamental Pyrus and various Crataegus.  On secondary hosts, I find it on a range of Trifolium (Fabaceae) species, Castilleja & Pedicularis (Orobanchaceae), and Penstemon (Plantaginaceae).  It is possible that more than one species is lumped into this general category.  It is widespread in North America, and I have material identified as this species from Washington, Oregon, Idaho, California, Wyoming, Colorado, Wisconsin, and New York. 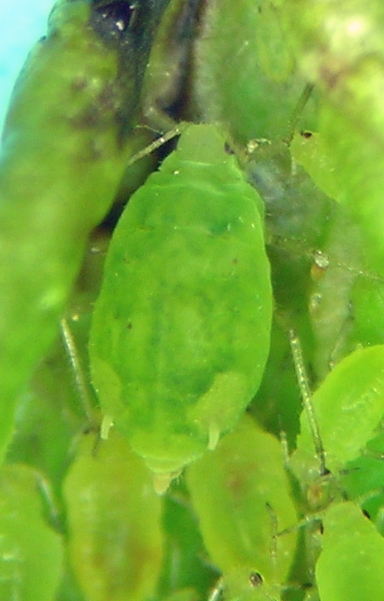 Nearctaphis bakeri fundatrix on ornamental Pyrus in our Idaho garden. 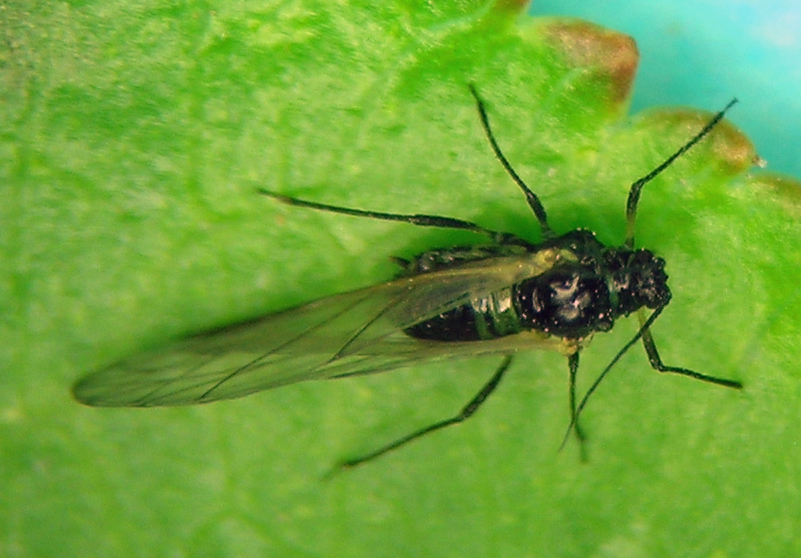 I use this name tentatively, as with all species in this genus, because species-level understanding of Nearctaphis is very poor.  Nonetheless, I was pleased to find what I call N. crataegifoliae close enough to home to get a photo.  It was growing on a small native Crataegus shrub in the Fremont National Forest, where Crataegus is extremely uncommon. This aphid is obviously heteroecious, but despite much effort I have never seen it on its legume secondary hosts. 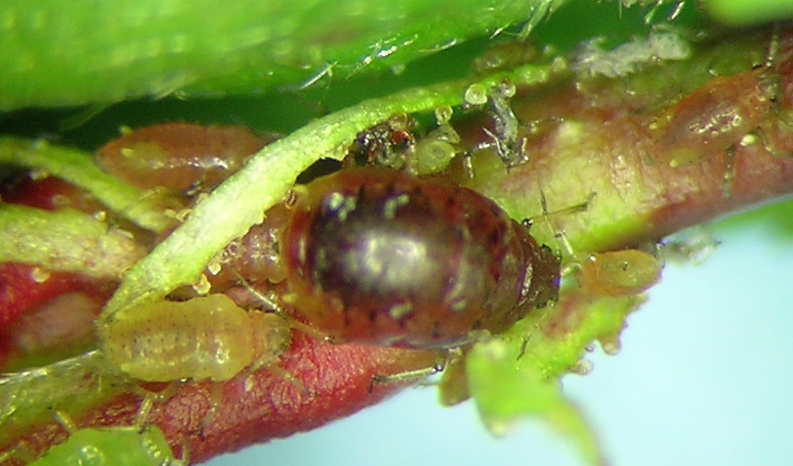 Even though I don’t have any photos of it, I wanted add a bit about Nearctaphis kachena.  After many years of collecting Nearctaphis, I’ve accumulated quite a few samples from various Castilleja (Orobanchaceae) species across the west.  During winter of 2018 I finally sat down and looked through them all.  I think that almost all of them belong to one species, and it seems that N. kachena is the best fit.  There is some variation among the samples in terms of how smooth are the tarsi and how long and segmented are the antennae, but these features seem to be rather variable in Nearctaphis generally when many samples from many places are considered.  In N. kachena, apterous viviparae sometimes even have 5-segmented antennae.  Also of interest is that I have collected this species from not only Castilleja but also from subalpine species of Mimulus (Phyrmaceae) and Penstemon (Plantaginaceae).  I now have specimens from Washington, Oregon, Idaho, California, and Montana.

This is the Nearctaphis that I find most commonly, probably because it is abundant and very apparent on its Amelanchier (Rosaceae) hosts in the spring and fall.  As noted by others, it is probably heteroeceous, but I have yet to find a secondary host for it.  Most likely such a host would be Fabaceae, and probably the roots or underground stems.  I am not as adept at collecting underground aphids as I could be….  I have material from Washington, Oregon, Idaho, Montana, California, Nevada, Colorado, and New Mexico. 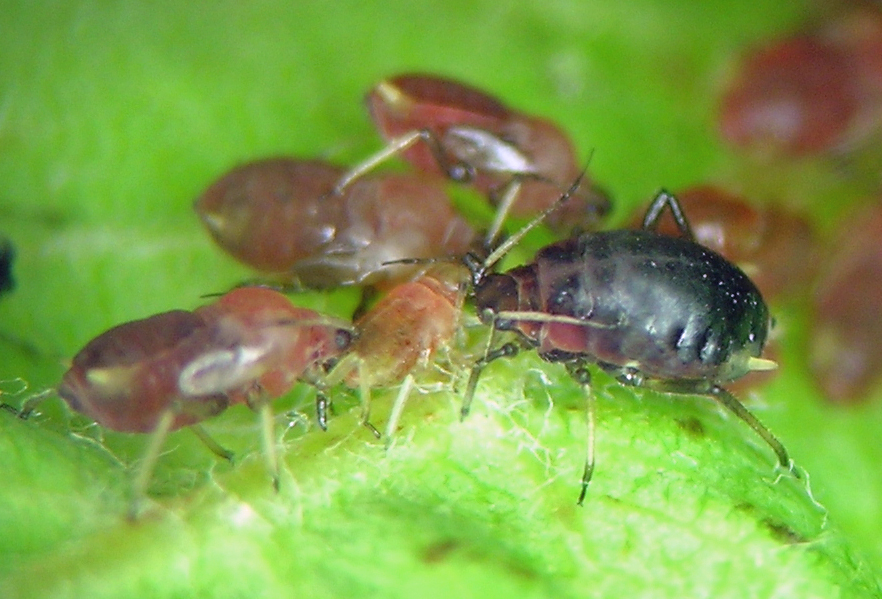 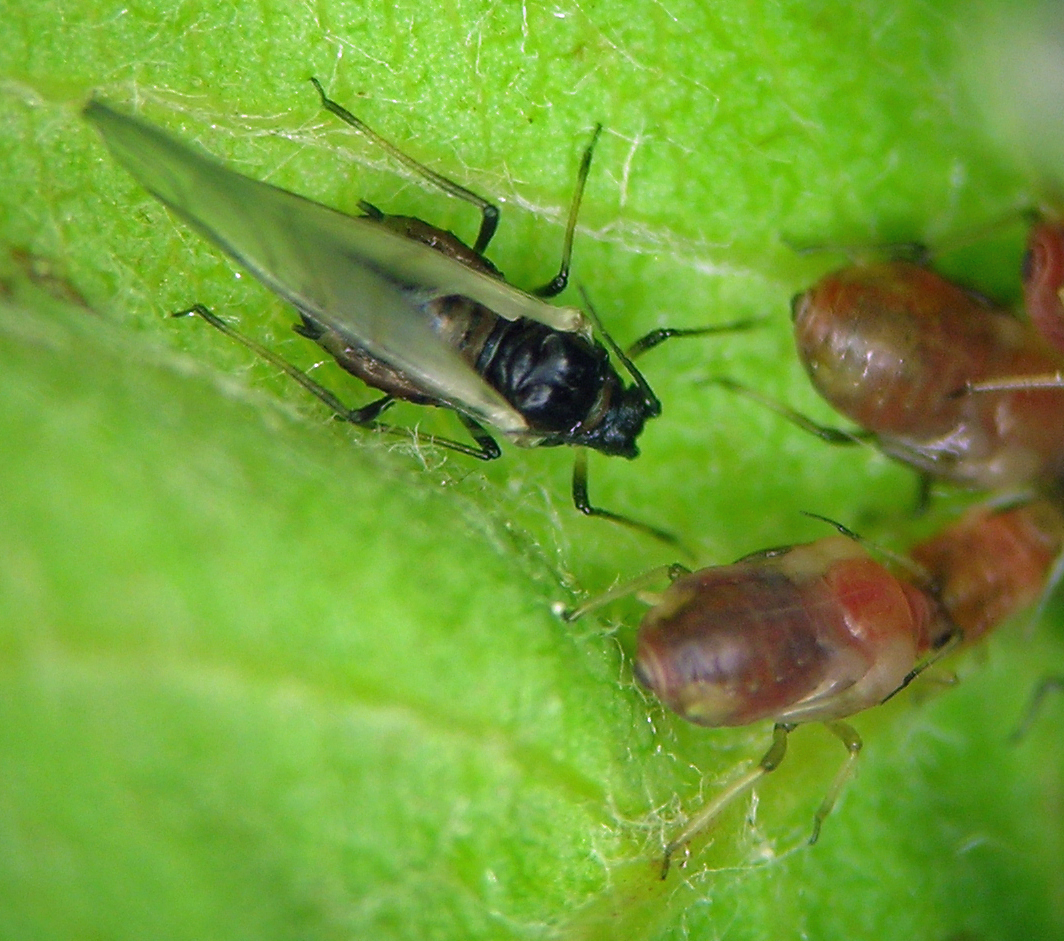