Bookend 1: Wisconsin and Back

(As with all photos on Aphidtrek, remember that to see the full size version, simply click on the photo in the text.

Remembering that we live at high elevation (1500 m) nestled among mountains and desert, the collecting season doesn’t really start until May.  This year, we kicked off our season in earnest with a cross-country drive to Wisconsin and back from mid-May through early June.  Leaving home the weather was bad, unseasonably cold, and before long it was snowing.  The snow followed us most of that day to Idaho Falls, where fortunately we had planned to stay under a roof instead of in a tent.  Each subsequent day of driving across the country was met by long periods of temperatures just above freezing, wind, and snow.  When finally we reached Wisconsin, the snow was subsiding to a period of cool cloudy weather.

Ultimately the purpose of the trip was two-fold: 1. to visit my relatives in Wisconsin, and 2. to see the forests and plant communities (and of course their aphids) of northern Wisconsin and Minnesota.  When we scheduled the trip, we knew that mid-May to early June was a gamble – that spring might not have arrived yet in those northern forests. 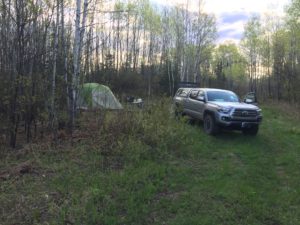 We did not win that gamble.  Some of the most interesting areas of Minnesota that we saw had obviously been covered in snow only a couple weeks previously, and buds of trees were just starting to open.  So, aphid collecting was mighty slow, with no success at finding any of the rare Macrosiphum I had hoped for.  A bright spot was adding two samples of Hyalomyzus monardae to my collection, a species that I had studied and written about, but that I had never seen in life.

This season-opening trip provided important samples only during the home stretch, as we reached the western edge of North Dakota and through Montana.  The best example of an interesting site was the Burning Coal Vein area of the Little Missouri National Grasslands in North Dakota.  As we drove south from the freeway we joked that the campground would be vacant apart from us, and that there would be sunshine, fire wood, and large well-kept camp sites with mowed grass and great views.  All of this turned out to be true! 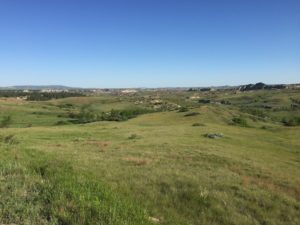 At this site I was able to collect multi-species samples from each of three sagebrush species – this being a goal of mine to explore possible host specificity at the species level among species of Epameibaphis, Pseudoepameibaphis, Pleotrichophorus, and Obtusicauda.  Another great opportunity was finding a species of Macrosiphum that should be published any day now on Linum lewisii.  This was a new state record, greatly expanding the known range of this species from previously known New Mexico and Oregon, and just in time to make it into the paper during the review process!

Most of our summer was spent near home with either local camping or one-day hiking outings from home. The high point of the summer was our stay at Lee Thomas Camp in July.  This campground is at about 1800 meters elevation, next to a large meadow and the head-waters of the Sprague River.  On this weekend I found, and for the first time correctly identified, the plant Lonicera cauriana.  And on it, found for the second time an undescribed species of Macrosiphum, thereby adding to the list of species associated with Caprifoliaceae across the Northern Hemisphere. 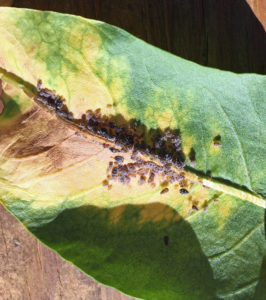 An Aphthargelia species on a yellowing leaf of Polygonum bistortoides.

Also on this trip we discovered and hiked much of the Hannan Trail, one of the few trails in the Fremont National Forest that is well-maintained.  Along it, I found my first sample of Aphthargelia cf. symphoricarpi on a secondary host, Polygonum bistortoides.  This find completely re-opens my work on Aphthargelia, published in 2013.

Bookend 2: Colorado and back

I don’t want to gloss over all the other interesting finds in 2017, but I need to wrap up this piece somewhere!

Anyway, our big season-end trip every year is to the Southwest, to partake in the annual field conference of the New Mexico Geological Society.  This year, that conference was actually in southwestern Colorado and based in Ouray.  As the departure date loomed (September 21), so did the first cold snap and snow of fall.  We left home in cold clammy weather, which only got worse as we drove through eastern Oregon and into northern Nevada.  By the time we reached our intended first night in Eureka, it was about -1 C and snowing.  We ended the day in a motel, in their only dog-approved room, and with only a space heater to keep us warm (the heater was actually more than enough, thank goodness).  Ever hopeful, I woke the next morning thinking of the aphid possibilities outside town. 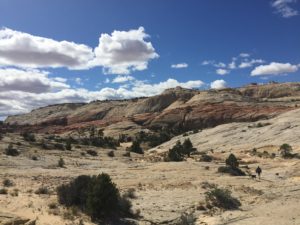 Throwing open the curtains, we saw 5 cm of snow on the ground, and even more on the hills surrounding town.  Another day of camping, hiking, and collecting thwarted, we carefully studied the weather patterns and decided our only hope for avoiding the snow was to head south, far from our planned route.  Long story short, we found that camping was possible near the southern border of Utah, and saw some great places, traveled some good roads, and made it to Colorado without further snow.  It was cold, but at least it didn’t snow.

Well, hold on now… Actually the final night of camping on Molas Pass near Silverton was affected by snow, but fortunately not while we camped.  That night was defined by near-winter conditions on the mountain, no aphids due to the lateness of the season, and a dog finding a porcupine.  Again, long story short, we ended the night camping at the pass while the dog spent the night in a veterinarian hospital, and we cooked an elaborate meal in the dark, by a roaring fire.  It wasn’t as bad as we thought it would be. 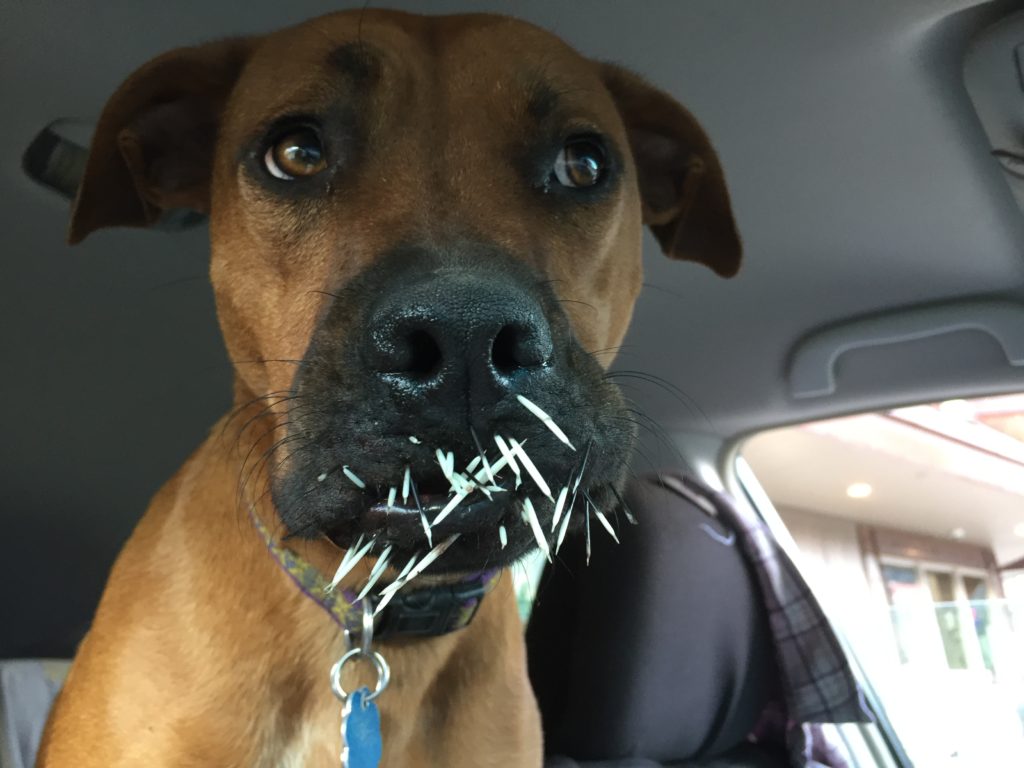 Mina on her way to the doctor for porcupine spine removal.

Next day, we finally arrived in Ouray, and checked into a small hotel room but in a very nice little town.  The dogs were happy to be in out of the cold (as was I), the weather relented (except for daily rain showers), and finally some real aphid collecting was possible!  While Gina attended the daytime conference events, I took the dogs aphid collecting.  The days we were in Ouray led to very interesting collections of Macrosiphum oviparae and males on Salix, Illinoia on Thalictrum and an unidentified Asteraceae, truly mysterious specimens of Macrosiphum on a species of forest floor Viola, a find of two recently documented species on Iva axillaris (one a Capitophorus, the other a Pleotrichophorus), and many other interesting and puzzling samples.  It was a good stay in Ouray.

Although the trip was trying at times, and tested our patience, it ended with a few good nights of camping en route home, some more useful samples, and we even took time out for some hiking in new places. 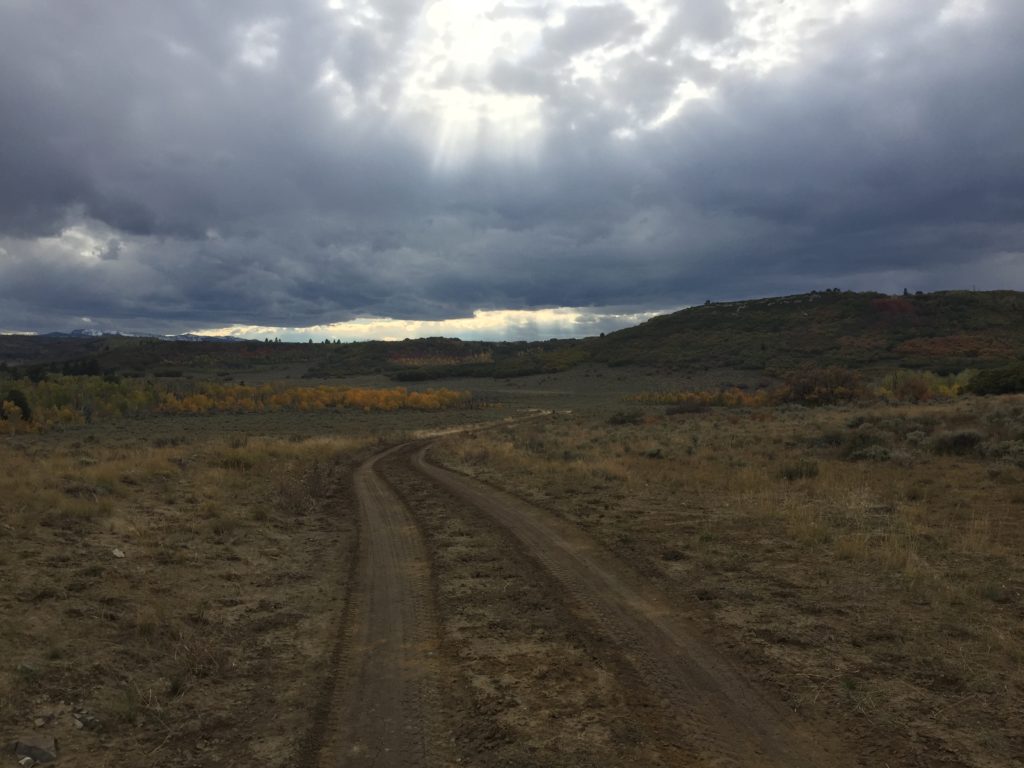 Hiking near camp in Utah on the way home, near Salina.