As is usual in the summer, our work lives, the garden, and Aphidtrekking have kept us very busy and mostly away from the keyboard to write for Aphidtrek.org.   Just a taste of some of the interesting aphid-related things we’ve done and seen are below.

We camped in a very remote place in northern Nevada called Yellow Rock Canyon.  In addition to some of the most nail-biting trail driving we’ve ever experienced, I also got to explore the aphids living on four kinds of sagebrush all in one locality (Artemisia tridentata both Basin and Wyoming, Artemisia cana, and Artemisia arbuscula).  Sagebrush aphids are very diverse, a great majority having been described from Artemisia tridentata.  My suspicion is that like me, many previous collectors did not know the sagebrush species well enough, and lumped species and subspecies of potential ecological importance into that single name on their slides.  Now that I am learning to recognize all the sagebrushes, I am eager to look for apparent host-specificity among the plethora of aphids. 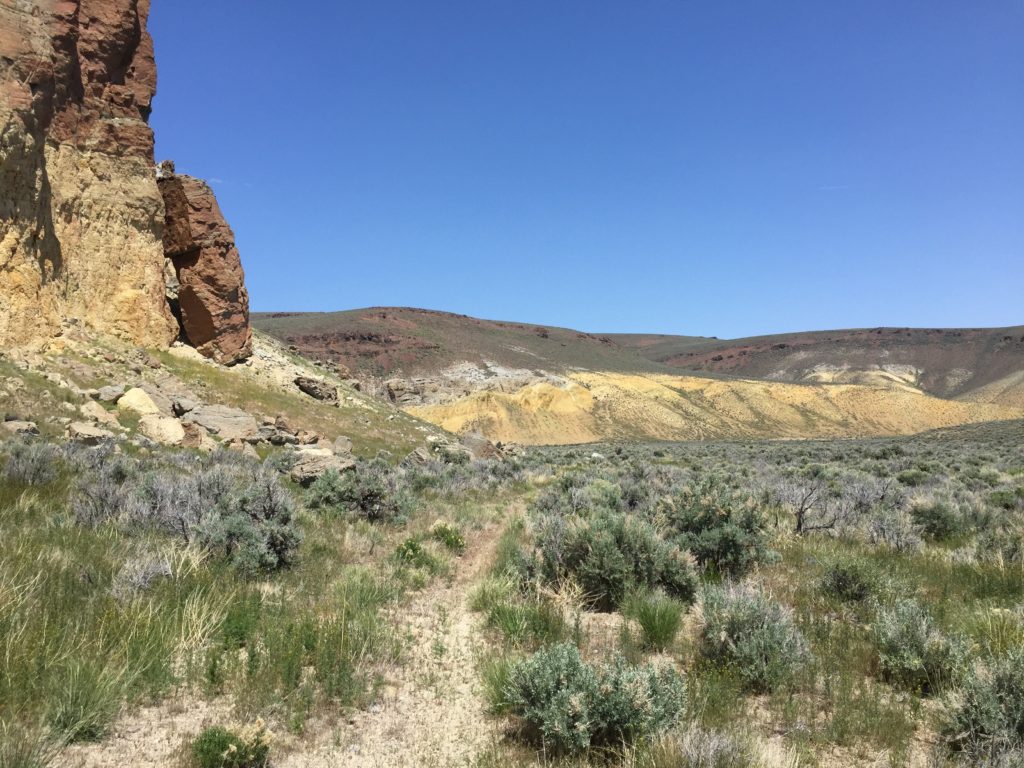 Yellow Rock Canyon area, Nevada. Note the amazing rock calved off of the cliff, still leaning against it.

We spent a cool, spring-like weekend in the northern Warner Mountains, at an old mostly-abandoned campground.  All weekend long we saw one vehicle drive by on the road.  I was lucky enough to find several of my target study species here, including undescribed species on Potentilla gracilis, Geum triflorum, and Holodiscus discolor dumosus.  We also walked a very good hike to Cook Peak, going high enough to have to clamber around a remaining snow field obstructing the trail.  This is one of several hikes we’ve done in the area on nice days, on national recreation trails, and saw no other humans all day.  If you want to hike in peace and solitude, come to the Warner Mountains of Oregon.

Our long-weekend trip in early July was to the Warner Mountains again, this time near Crane Mountain.  One of my goals was to collect on the vigorously growing wildflowers in Dismal Swamp where I know of a very strange and probably undescribed species of Uroleucon (Lambersius), plus I wanted to look for Potentilla fruticosa and the elusive aphid Myzaphis canadensis.  I found the former, but alas, the latter was not present.  We also wanted to hike to the summit of Crane Mountain, the highest point in the Oregon portion of the Warners.  To our surprise, the hike was not terribly steep, most of it being on an old road that serviced a fire lookout tower that used to stand atop the mountain.  The ridge at the summit was yet again a site of Holodiscus heavily infested with a few aphid species that were just beyond the fundatrix stage.  Also, it was further proof of the migration of Uroleucon (Lambersius) erigeronensis up elevation gradients as the season develops — in this site there was a small yellow-flowering composite that was uniformly infested with alate Uroleucon and their offspring. 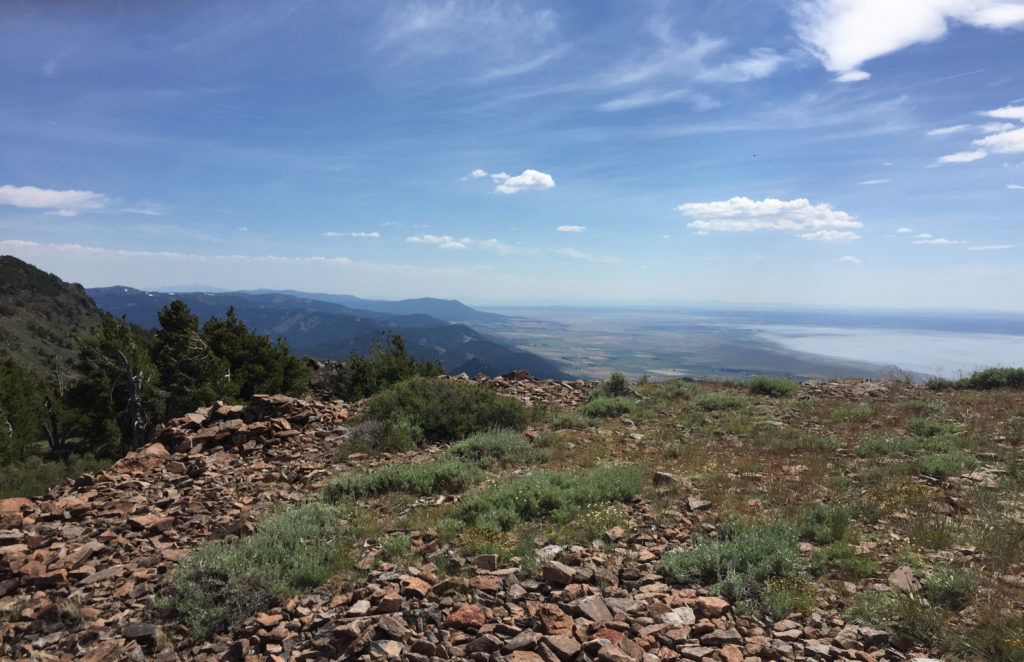 The view south from Crane Mountain. The darker green shrub in the foreground is my favorite, Holodiscus discolor dumosus.

Our most recent trip was into the South Warners in northern California. Saturday was a long and busy day, with a hot-air balloon ride in the morning in Alturas (we thought we were merely crew, but got to ride as well!), followed by an afternoon hike on the Summit Trail into the South Warner Wilderness.  This was a site for the aphids — almost every likely plant had aphids and in overwhelming abundance.  One drawback was that three of the most polyphagous aphids native to the West were also very abundant on many plants — Aphis helianthi (now we are to change to the name Aphis asclepiadis), Macrosiphum euphorbiae, and Uroleucon (Lambersius) erigeronensis.  Excitingly, it was the second weekend in a row I found a Macrosiphum living on Monardella occidentalis — a beautiful mint shrub.  No aphids have previously been recorded on this plant. 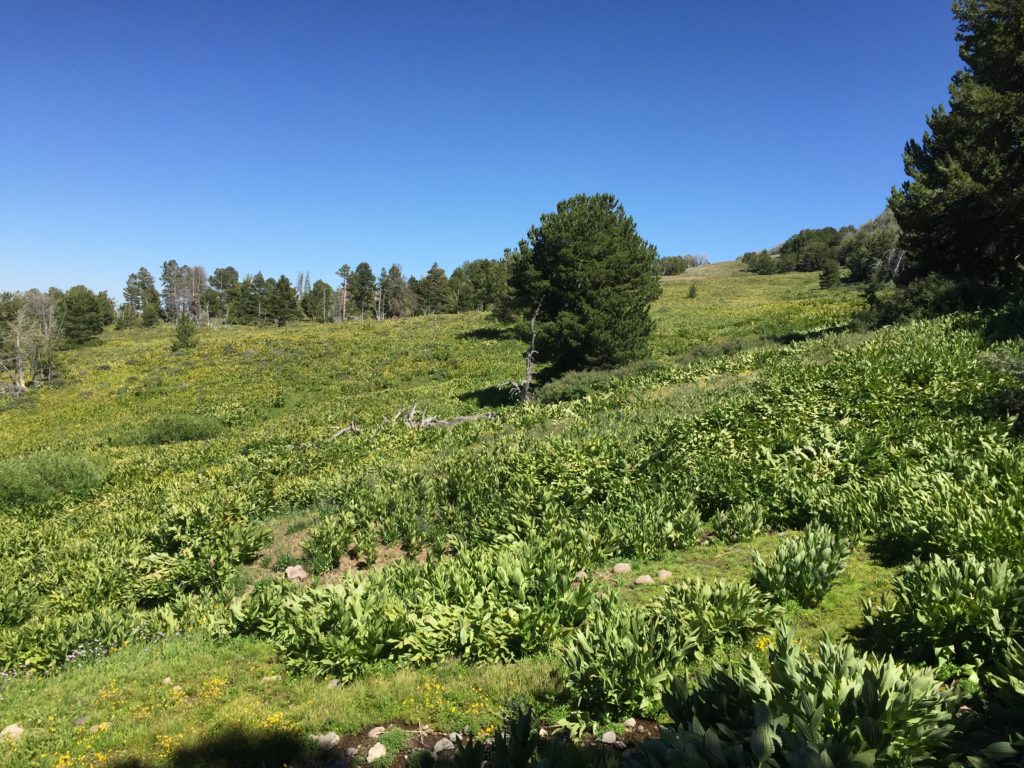 The Owl Creek area in the South Warner Wilderness. This is a mountain wetland and vast field of Veratrum dotted with shrubs of Potentilla fruticosa and Symphoricarpos.